10 Most Outstanding Road Bridges in India 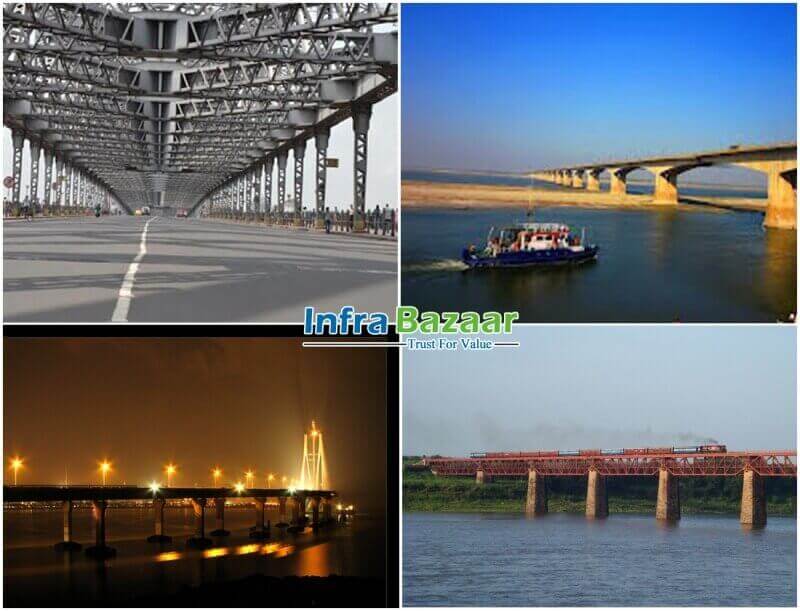 In the land of rivers, lakes, canals and Big dams how can bridges be far behind. The Indian infrastructures of bridges are making their way to international market. India has some of the best structure of flyovers, expressway, tunnels and bridges, best bridges include Hanging Bridge, live bridges and common bridges. These bridges play a very important role to make second largest wide network of road transport in the world. The best way to enjoy beauty of city is to view it from the middle of the river; here are some most beautiful river road bridges of India.

Mahatma Gandhi Setu (also called Gandhi Setu or Ganga Setu) is a bridge over the river Ganges connecting Patna in the south to Hajipur in the north of Bihar. Its length is 5,575 metres (18,291 ft) and it is one of the longest river bridges in India. It was inaugurated in May 1982 by the then Prime Minister, Mrs Indira Gandhi.

Pamban Bridge is India’s first sea bridge.It is the second longest sea bridge in India, after Bandra-worli sea link. It connects the Rameshwaram Island with the mainland of India.

The Bandra-worli sea link is a hanging cable-stayed, 8 lanes bridge which gives a huge relief form traffic for the Mumbaikars. A new landmark of Mumbai, Bandra-worli Bridge is India’s Biggest Sea Link Bridge and India’s very own golden gate.

The Howrah Bridge (officially Rabindra Setu, on the river Hoogly is a cantilever bridge supported by two 270 ft. high piers at both ends. An engineering marvel, the span of the bridge between the piers is 1500 ft. while the distance between the two sheet anchors is 2115 ft. The 71 ft. wide bridge has eight tracks for vehicles including tramcars and two footpaths.

Narmada Bridge is one of the longest bridge in Gujarat. It’s a balanced cantilever type bridge connecting link between Ankleshwar to Bharuch. The bridge also known as The Golden Bridge builds across the holy river Narmada.

Bogibeel bridge is a combined road and rail bridge in the Dibrugarh district of the north eastern Indian state of Assam. Upon its expected completion in 2017 the 4.94 kilometres (3.07 mi) long bridge, work on which was inaugurated in 2002, will become the longest bridge of its kind in India and the longest bridge across the Brahmaputra River.

Jadukata Bridge is the longest span cantilever bridge in India. Jadukata Bridge, Meghalaya listed as one of the most beautiful bridges in the world.

The jawahar setu is across the Sone River, between Dehri-on-Son and Son Nagar, in the Indian state of Bihar. The 3 Km long road bridge carries the Grand Trunk Road/ NH 2.  There is a second longest railway bridge runs parallel to the road bridge is called Nehru Setu.