100 Years of Aviation in India 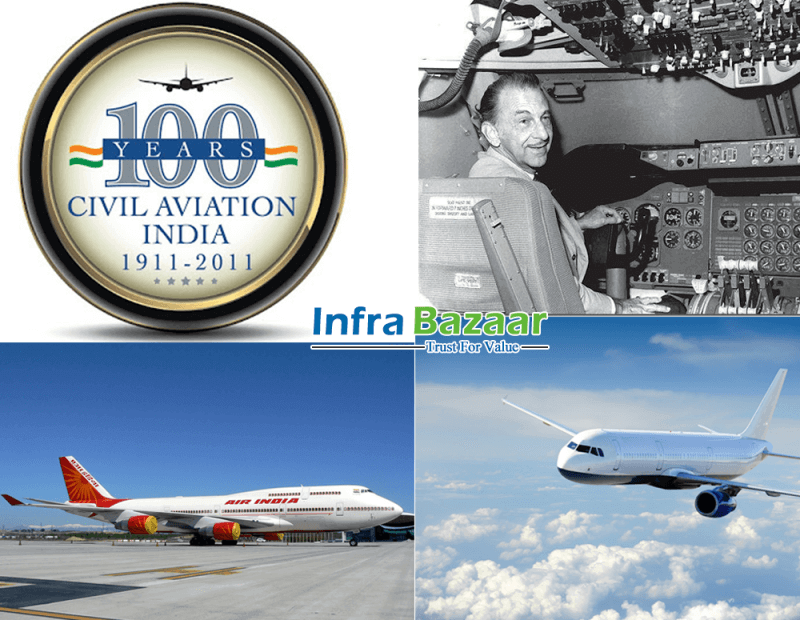 India completed 100 years of aviation on 18 Feb 1911, the growth of the aviation is phenomenal  with in short time India implemented world standards.  The first flight take off from Allahabad to Naini covered a distance of 6 miles, in December 1912 the first international flight took place in collaboration with UK based company Imperial airways from  London - Karachi – Delhi, in 1915 Tata Sons Ltd has entered the aviation industry started services between Karachi and Madras without any help  from government of India.

During the period of independence, 9 air transport companies were carrying both air cargo and passengers in the Indian Territory. In 1948, the Indian Government and Air India set up a joint sector company, Air India International to further strengthen the Aviation Industry of India. As part of nationalization in 1953 of Indian Airlines (IA) brought the domestic civil aviation sector under the purview of Indian Government. Later till the mid 1990's government-owned airlines dominated Indian aviation industry. When the government adopted the Open-sky policy in 1990 and other liberalization policies the Indian Aviation Indian made underwent a rapid and dramatic transformation.

1953 also saw the introduction of  India’s  Civil Helicopter Services.In 1956 Ms. Durba Banerjee was  inducted as the first woman pilot of Indian Airlines. In 1960  India entered  the jet age with the introduction of Boeing 707-437 into the fleet of Air India and USA was connected to India for the first time by an Indian airline flight. In 1972 the International Airports Authority of India (IAAI) was constituted  and  Vayudoot  airlines (a government owned airline company) started  operation in the year 1981.In 1984 Squadron Leader Rakesh Sharma of Indian Air Force becomes the first Indian cosmonaut and the 138th man in  space spending 8  days in space abroad Salyut 7.In  1985 Captain Saudamini  Deshmukh commanded the first all women crew flight on an Indian Airlines Fokker friendship F-27 on the Calcutta-Silchar route. She also commanded the first Boeing all-women crew flight on September 1989 on the Mumbai-Goa sector.

1985 also saw the establishment of Pawan Hans Helicopters Limited(PHHL)  and the establishment of  Indira Gandhi Rashtriya Uran Academy (IGRUA) in Fursatganj, Rai Bareli in Uttar Pradesh for training of pilots.1985 was also a very traumatic year for Indian aviation when Air India flight AI 182 between Montreal and Delhi was blown up by terrorists over the Atlantic Ocean.   Following this, the  Bureau of Civil Aviation Security was established in 1987.The National Airports Authority was constituted in 1986.In 1989  Indian Airlines became one of the earliest airline of the world to induct A320s type of aircraft from the Airbus company.

1990-91 saw the entry of private airlines after the de-regulation of the civil aviation sector.  Private airlines were given permission to operate charter and non-scheduled services under the ‘Air Taxi’ Scheme.  The East West Airlines was  the first national level private airline to operate in the country after almost 37 years. In 1990 Captain Nivedita Bhasin of Indian Airlines  at 26 became the youngest pilot in civil aviation history to command a jet aircraft. She also  became the first woman check pilot on an Airbus A300 aircraft.  1990 was also a land-mark year for Indian civil aviation and Air India when  Air India entered  the Guinness Book of World Records for largest evacuation effort by a single civilian airline when it flew  over1,11,000  people from Amman to Mumbai in 59 days operating 488 flights just before the Gulf war began.

In 1994, following the repeal of the Air Corporation Act private airlines were permitted to operate scheduled services  and a number of private players including Jet Airways, Air Sahara, Modiluft, Damania Airways, NEPC Airlines and East West Airlines commenced domestic operations. In 1995 India’s six private airlines accounted for more than 10% of domestic traffic.   Many foreign airlines started providing international services.  In 1995, 42 airlines operated air services to, from, and through India.In 1995 Airport Authority of India (AAI) was  constituted after the merging of the International Airport Authority of India with National Airports Authority. In 1998 Dr. Kalpana Chawla became the first Indian-born woman to fly to space as part of a NASA team.  1998 also saw the first Private Airport come up in the country in  Cochin, Kerala.

1999 was another tragic year in the history of Indian civil aviation when the IC 814 flight of Indian Airlines was hijacked to Kandahar.2003 saw the ushering in all the ‘Low Cost Carriers’ in the country when   Air Deccan started its services. In 2004 Government approved setting up of private airports at Hyderabad and Bangalore. In the December of 2004 Indian Scheduled carriers with a minimum of 5 years of continuous operations and a minimum fleet size of 20 aircraft, were permitted to operate scheduled services to international destinations. 2005 saw the rebranding of Indian Airlines as Indian.  It also saw the entry of the Kingfisher Airlines.  This year the Government designated Air India, Indian Airlines, Jet Airways and Air Sahara to operate international services.

In 2006 the Government approved the restructuring and modernization of Mumbai and Delhi Airport through Public Private Partnership. 2007 saw the Regional Airlines Policy being  announced wherein licenses were given for operation of  airlines within a particular region. In 2008 the path breaking  Greenfield Airports Policy  of the Government was announced. By the year 2000 several private airlines have entered into the aviation business in succession and many more were about to enter into the arena. Indian aviation industry today is dominated by private airlines and low-cost carriers like Deccan Airlines, GoAir, and SpiceJet, etc. And Indian Airlines, the giant of Indian air travel industry, gradually lost its market share to these private airlines. According to the report of CAPA, these budget carriers are likely to double their market share by 2010 -- one of the highest in the world.