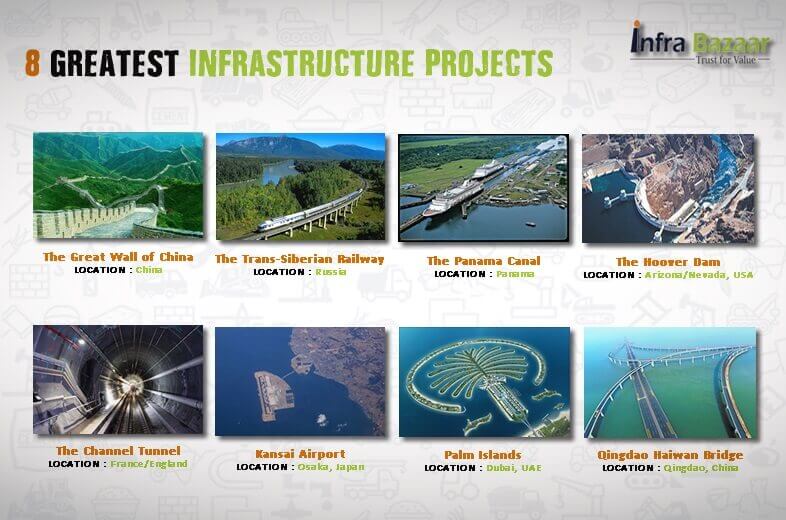 The Trans- Siberian Railway is one of the massive Russian railway networks in the world. It connects the European rail network to the Chinese rail network on the other end. It has great importance in the economic, military and imperial history of the Russian Empire and Soviet Union. Trans- Siberian is not only just a railway; it’s an amazing experience in a condensed version of life.

The Palm Jebel Ali and Palm Jumeirah is an artificial archipelago designed in the shape of palm tree. A palm island is a cluster of manufactured islands in United Arab Emirates; it was constructed using 7 million tons of rock according to developer Nakheel.  In November 2014 the palm islands was completed. Palm islands are greatest attraction for tourists. It houses large number of residential, entertainment and leisure centers, which consists of about 520 Kilometers of non-public beaches in the city of Dubai.

Hoover Dam is one of the world’s largest reservoir which forms from Colorado River in United States, the bridge is about 900 feet over the river and 726.4 feet rock foundation to the road way. The height of tower is 1,224 feet across the top and 660 feet thick at the base. Dam was constructed between 1931 and 1936. Hoover Dam is named as one of the top 10 Construction Achievements of the 20th Century and also the dam attracts more than a million visitors a year, the construction was completed in less than five years.

The Channel Tunnel is recognized as one of the “Seven Wonder of the Modern world “by American society of Civil Engineers. Channel Tunnel is longest undersea tunnel in the world about 31.4 Miles long. The three tunnels of each 50 kms long were bored at an average of 40m under the sea bed and the link folk stone is in the Kent to Coquelles in Pas-de-Calais.

Kansai International Airport is one of the Japan’s important international airports; it was built in a man-made island about 40km of south central Osaka. Kansai Airport was opened in 1994. It has two terminals, Terminal 1 is main terminal, it’s housed in a long modern building and it serves both domestic and international flights by regular airlines. It has been predicted that the island would sink 5.7m by most optimistic estimate as the weight of material used for construction are compressed by the seabed silts.

The Panama Canal is built in August 15th 1914, the American built waterway across the Isthmus of Panama that connects the Atlantic and Pacific Oceans. Its about 50 miles long passage constructed for shortcuts for ships; after panama canal was constructed, a vessel sailing between New York and California was able to bypass a long journey around the tip of south America, which is nearly 8,000 miles for the complete its voyage.

Qingdao Haiwan is world’s longest bridge across water in China. Bridge was opened in June 2011 which is about 26.4 miles long. Qingdao Haiwan Bridge is also known as Jiaozhou Bay Bridge. The bridge is a t-shaped road, which costed about $2.3 billon to build and it’s a part of better strategy connectivity between the two fast growing industrial regions. The bridge has special ability to withstand earthquakes of 8.0 magnitudes. The life span of the bridge is minimum 100 years, Worlds first project which they have used 5127 punching bored concrete piles.