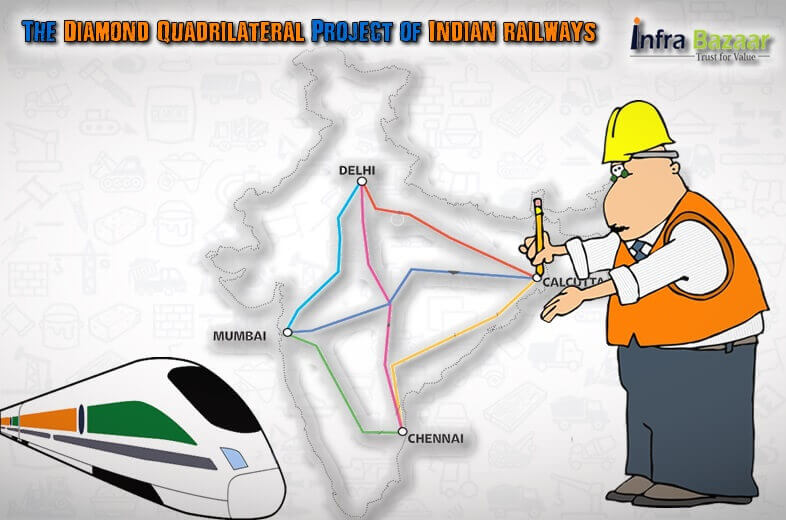 The Diamond Quadrilateral railway project is to develop high speed rail network across several metros of India. This quadrilateral railway network connects major metro cities in India, i.e. Delhi, Chennai, Mumbai, Ahmedabad, Kolkata Hyderabad and Chennai. This project is similar to Golden Quadrilateral which is roadway project of India which connects four metros by express ways, the project falls under National Highways Development Project which has supported for better road transport in India. In the same way to improve India’s rail infrastructure there is a need to implement High speed trains/ Bullet trains.

The Diamond Quadrilateral project will cost of Rs 2 Lakh crore and the Indian government aims to reduce the travel time between Metro cities by half with the introduction of high speed trains, which runs at about 300kmph. Mumbai- Ahmedabad sector will be the first corridor of this ambitious project connecting about 543 kilometers, already experts from France and Japan are conducting their feasibility studies.

Moving ahead on the bullet train project, Indian government has undertaken feasibility study for high speed rail corridors between Delhi and Mumbai, New Delhi and Kolkata, Mumbai and Chennai, which are major part the Diamond Quadrilateral project

According to the action plan of Diamond Quadrilateral railway project, China, Japan and Spain will co-operate on the development of this project. Japan, China and Spain have also agreed to impart training to Indian railways in this regard.