A full moon over Greece's Temple of Poseidon 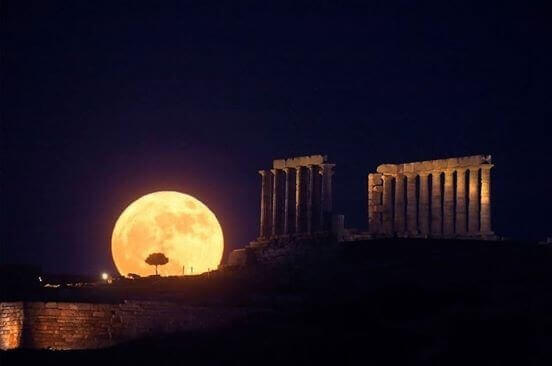 The temple of Poseidon was constructed in 444-440 BC, over the ruins of a temple dating from the Archaic Period. It is perched above the sea at a height of almost 60 m. The design of the temple is a typical hexastyle i.e. it had a front portico with 6 columns. Only some columns of the Sounion temple stand today, but intact it would have closely resembled the contemporary and well-preserved Temple of Hephaestus beneath the Acropolis, which may have been designed by the same architect.
As with all Greek temples, the Poseidon building was rectangular, with a colonnade on all four sides. The total number of original columns was 34: 15 columns still stand today. The columns are of the Doric-Order. They were made of locally-quarried white marble. They were 6.10 m (20 ft) high, with a diameter of 1 m (3.1 ft) at the base and 79 cm (31 inches) at the top.
At the centre of the temple, colonnade would have been the hall of worship (naos), a windowless rectangular room. It would have contained, at one end facing the entrance, a colossal, ceiling - height (6m) bronze statue of Poseidon. Probably gold-leafed, it may have resembled a contemporary representation of the god, appropriately found in a shipwreck. Poseidon was usually portrayed carrying a weapon he supposedly used to stir up storms. On the longest day of the year, the sun sets exactly in the middle of the caldera of the island of Patroklou, suggesting astrological significance for the sitting of the temple. The temple of Poseidon was destroyed in 399 by Emperor Arcadius.
Archaeological excavation of the site in 1906 uncovered numerous artefacts and inscriptions, most notably a marble Kouros statue known as the Sounion Kouros and an impressive votive relief, both now in the Athens National Archeological Museum.