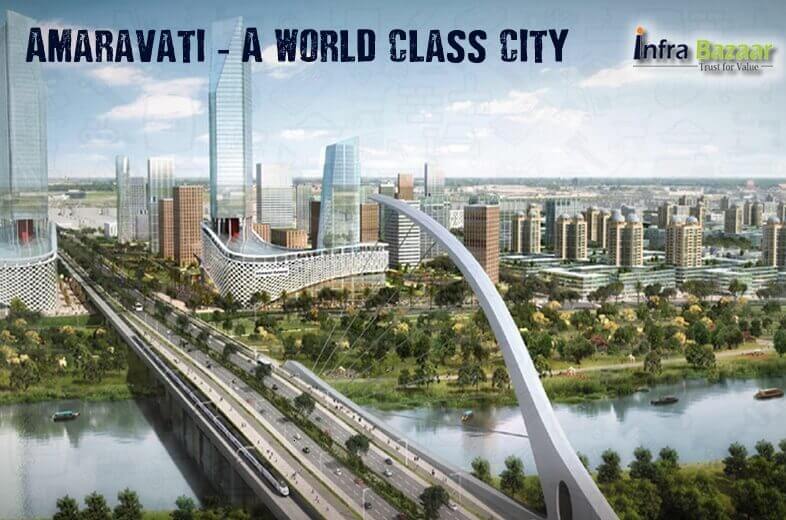 The entire India is looking up at Amravati as a modern city and even as an innovative capital that might well become outline for India’s 100 smart cities project.

The Indian Prime Minister Sri Narendra Modi also hoped that Amaravati will be a model for his government’s urbanization effort and initiative to develop 100 Smart cities. Amravati will provide a transport system which comprises of an integrated network of Metro rail of about 12 kms, bus rapid transit about 15kms, arterial roads and sub-arterial roads of about 26 kms, collector roads of about 53 kms and downtown road of about 7 km with varying rights-of-way.

Andhra Pradesh CM has invited companies from China, Singapore, Japan and other countries for development of Amravati as the state capital. With the process of designing and conceptualization over, the real work on constructing the capital starts now. CM faces a challenge in mobilizing the funds from the central government and investment from abroad.

The Central government, has sanctioned Rs. 1,850 crore in three phases for the new capital city and will stand by Andhra Pradesh as it builds on of the most modern capitals in India, Modi said.

Andhra Pradesh and Japan have agreed to set up an investment task force in Japan for fast track industrial development in southern Indian state. This task force will include officials and ministers from both countries. Therefore Singapore, Japan has developed master plans for Amaravati, and also joined hands to help and develop the newest state capital in the country. Japan has assured extend of financial assistance and technical expertise to support build Amaravati, Andhra Pradesh’s brand new capital, on the banks of the river Krishna. This will be first foreign government coming forward to help build in Indian state capital after the country’s independence.

The Japan Bank for International Cooperation (JBIC ) and Andhra Pradesh’s finance department has officially signed a principle agreement for developing the capital and industry. Japan government has assured that they will cooperate in development of industrial clusters, public infrastructure, intelligent transport systems and a comprehensive energy management system.

Japan’s ministry of economy, trade and industry has officially said, “We from Japan understand what great effort it takes to make a new city. All our experience, all our technology and good wishes are here to help the people of Amaravati make this a beautiful city”