Angkor Wat - The Largest Religious Monument in the World 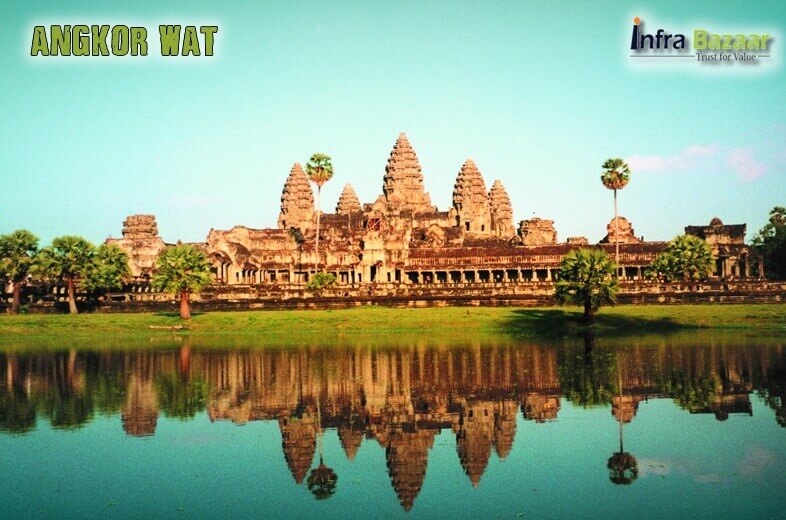 Angkor Wat or Temple City is one of the largest monuments in the world, located in Cambodia. It was originally built for The Hindu God, Vishnu by the Khmer King Suryavarman and gradually transformed into a Buddhist temple towards the end of the 12th century in Yasodharapura. The temple was built in high classical style of Khmer architecture. Angkor Wat temple symbol is quite visible in the national flag of Cambodia; temple is a country’s key attraction for the visitors.

Angkor in Cambodia is one of most beautiful architectures of South-East Asia. Stretching over some 400 km2 Angkor Archaeological Park contains the magnificent remains of the different capitals of the Khmer Empire. They include the famous Temple of Angkor Wat and Angkor Thom a Bayon Temple. UNESCO has set up a several programs to safeguard this symbolic site. According to the legend, the construction of Angkor Wat was planned by Indra to act as a palace for his son Precha Ket Mealea. According to the 13th century Chinese traveler Daguan Zhou, it was thought by some that the temple was constructed in a single night by a divine architect.

The Angkor Wat temple is really magnificent, about five million tons of sandstone was quarried and transported more than 25 miles (40kms) to the temple. Angkor Wat temple largely represents the Hindu’s cosmology. The temples curtain wall measures around 1,280m (4,200 ft), each side wall of the temple is nearly half a mile and the height of its central tower is 65 meters or 213 feet. The four small surrounding towers represent the five peaks of the scared Mount Meru.  The massive place around the temple is about 5.5 kilometers in length, it represents the world’s oceans.

The Angkor Wat is a massive model of the universe in the stone and it’s represents an earth model of the cosmic world. The central tower is special attraction which rises from the center of the monument symbolizing the mythological mountain. The outer wall of the Angkor Wat corresponds to the mountains at the edge of the world surrounding the oceans beyond.

Angkor Wat itself is surrounded by a 650-foot-wide (200 m) moat that encompasses a perimeter of more than 3 miles (5 km). This moat is 13 feet deep (4 m) and would have helped stabilize the temple’s foundation, preventing groundwater from rising too high or falling too low. The heart of the temple was the central tower, entered by way of a steep staircase, a statue of Vishnu at top.

The sight of the grand monument towering over the landscape is a true marvel to watch.