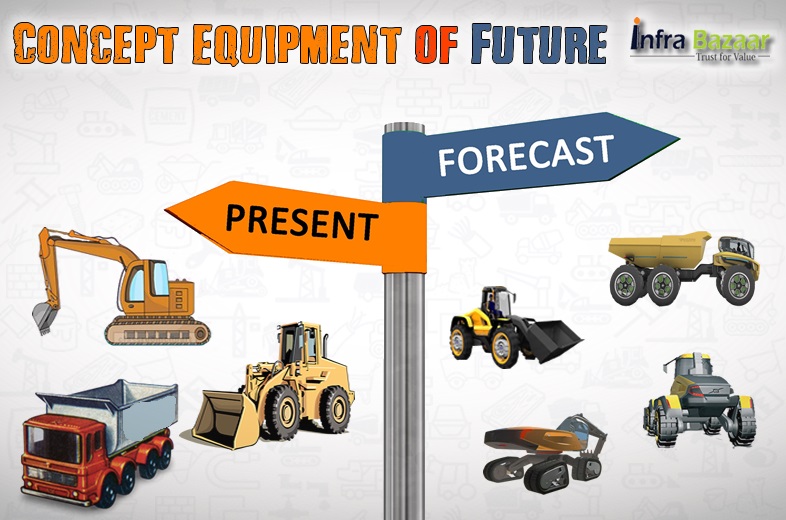 While nobody knows what the future holds for tomorrow, a team of 20 engineers are working relentlessly at Volvo to design Equipment for 30 Years ahead of our time. As per one of the department directors  “It is our job to look as many as 30 years into the future and produce a roadmap of the technologies that are embryonic today – but which could make a difference in the future,” says Jenny Elfsberg.

We now bring you some of the machines that can be claimed as concept equipment of future. These Heavy Equipments which are specially designed for executing construction tasks. These five equipment systems are specially implemented in traction, structure and power control. These heavy equipments function through the mechanical way but are controlled with complex computer codes.

The Sfinx - A radical excavator

The “SfinX” conceptual excavator, it not only brings incremental improvement to basic components like the bucket and boom, it has some highly innovative components that Volvo admits may not be included into the product development but it was a great idea. In the earlier days the diesel engines which were used now has now been replaced by hydrogen fuel cell system that especially takes water vapor and heat only. The engine which moves to the rear, it doesn’t work as an “active counterweight,” moving in and out to compensate for movement in the boom.

The Gryphin - An extreme wheel loader

The Volvo’s “Gryphin” wheel loader is surely named as a powerful fabulous creature that is half lion and half eagle. This revolutionary innovation includes the four independently driven wheels that have its own electric motor. It allows climbing in unique ways. This wheel loader includes a zero- emission electric hybrid engine and cab that has photometric glass, lightening and darkening. It will change according to the optimum operator visual acuity.

The Centaur - A revolutionary hauler

The concept Centaur rewrites the rule for expressed haulers; the design of the centaur is such that it opens up the possibility to rapidly change in work application by uncoupling the front “tractor” from the trailer. It allows you to easily control from hauler to pipe or log carrier and then liquid bud vase. While instantly it recognizable as Volvo, the Centaur completely redraws the traditional hauler. With an ultra-compact front unit arched back and super-sized wheels, it is a swift, flexible, strong and intelligent machine.

The 'Fenix' – A paver concept model

Fenix paver is an extreme concept asphalt compactor from Volvo Construction Equipment. Like the enduring fabulous fiery bird as the name states, Fenix paver is flexible, fast and intelligent and it is easy to use on a friendly environment.  The operator of the prospect will no longer be exposed to the elements and will board by using the Fenix inclined ramp. The safe seat is air conditioned and very comfortable. With the entire cab and it can be elevated to give a commanding worksite overview. Position of the cab can be altered in height and s expected to suit the needs of the job.

The ETF – A Mining Truck

The ETF has developed new into a modern Mining truck, which merge the features of Large Haul truck and articulated dump truck. The ETF’s innovative solution ensures 95% technical availability for maintenance and repair issues. It has reduced haulage cost per ton and with improved safety. It can also increase productivity many more output by reducing haul road costs and leave an environment footprint. The ETF mining truck can operate on both off Highway and off Road conditions.