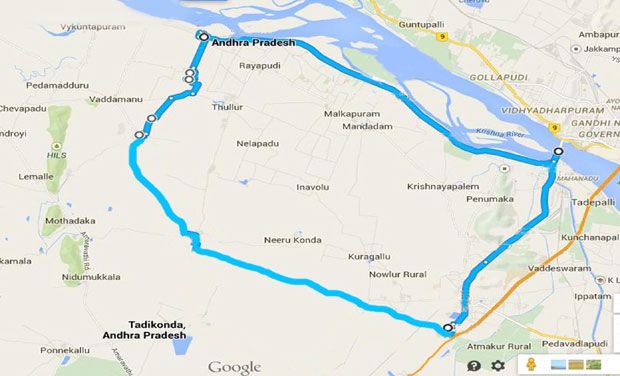 The newly formed TDP (Telugu Desam Party) government has already announced the location of the new capital near Vijayawada city, on the banks of river Krishna. The core capital will be spread over a stretch of 122 sq. kilometres, while the capital region will be spread over 7068 sq. km covering cities of Vijayawada, Guntur, and many mandals in the districts of Krishna and Guntur.

The government has chosen a stretch of land, with no infrastructure or whatsoever, to build a world-class capital from scratch. Government has already pooled a big chunk of land in the capital area

Existing Infrastructure in the Capital City

The core capital area which falls in the mandals of Thullur, Nelapdu, and Neerukonda is mostly comprised of agriculture land, with hardly any urban living or connectivity. The government particularly chose this place because of its geographical advantage (riverfront), and its proximity to the city of Vijayawada.  Also, it is easy to construct a capital as per the plan in a fairly empty place than building one in an existing city. As of now, the core capital area depends on Vijayawada for road, rail and air connectivity.

The Big Opportunity for the Construction and Infra related Companies

The huge tract of land in the core capital region of Andhra Pradesh is just agricultural land, and everything has to be built from the scratch. Be it roads, offices, administrative buildings, residential buildings, power lines, drainage system etc, all of them need to be developed, in not so big span of time.

Major Infrastructure Announcements in and around the Capital City

The government also announced a Sentosa (Singapore) like tourist island in Bhavani Island, a small sized island located in Krishna river, near Vijayawada.

PPP Model – the Only Scope for Andhra Pradesh

The State of Andhra Pradesh is now finding it difficult to even pay salaries to its employees. With state falling in deep budget crisis post-bifurcation, it is virtually impossible for the state to build an entirely new capital city on its own. The government already estimated that the capital city requires a whopping 1 lakh crore rupees to complete the first phase of the construction.

The government has to go with PPP model for most of the construction and other infrastructure projects in Andhra Pradesh capital city.