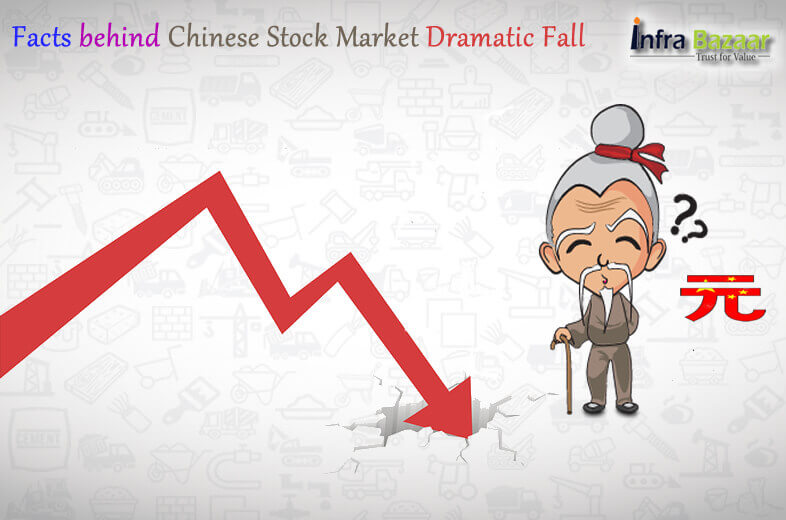 Have you read about the Greece Debt's? Worried about its financial consequence on Indian markets and economy? It’s time to shift your focus! A bigger threat is playing out right next door, in China. After rising to historic highs, Chinese stock markets are witnessing an unabated free-fall since last month.

Every one third value of share on the Shanghai Exchange was lost within one month of span and also due to highly overvalued stock prices the Chinese Stock Market is rigorously fluctuating low.

The Chinese people fear about the stock prices which have reached unsound levels at time where Chinese economy is not doing well, however investors are attracting the people and some of them are showing interest of buying stock too.

Chinese stock markets are world’s best performing rising market as per the last year survey, but from the last four months markets are fluctuating low and have dropped 30% in last three weeks. On June 8th 2015 about 1300 trade companies which are listed in China’s stock market have suspended their trades to protect themselves from the huge declines in the equity market.

The Three major reasons being cited for dramatic fall

1. The price in the stock market is highly overvalued & also due to herd mentality of investors who attracted the users to buy the stock too.

2. The complete stock market performance is directly connected with the economic performance. In 2007 GDP was 14% but thereafter the growth was getting low continuously and last year GDP reached 7.4% due to which investment in sales and retail business have also declined.

3. Additional reason for cautiously drop is margin trading, in this business the investors borrows money from the broker to purchase stocks and if price of stock has been dropped below the certain level, then he has to sell few more shares to pare the fall.

Does it Effect to India?

As per Stock market expert’s analysts view the market fall in the china is in temporary shock, India might be affected with the Chinese market and India could feel that as good news because India would be next favorable investment destination and in future it is possible that India will be capital for share marketing.

However, India could be in trouble if the disruption in Chinese markets spills over to its economy because China is India largest trading partner and a disruption in the Chinese economy and markets would mean businesses pulled back from investments till the situation stabilizes.