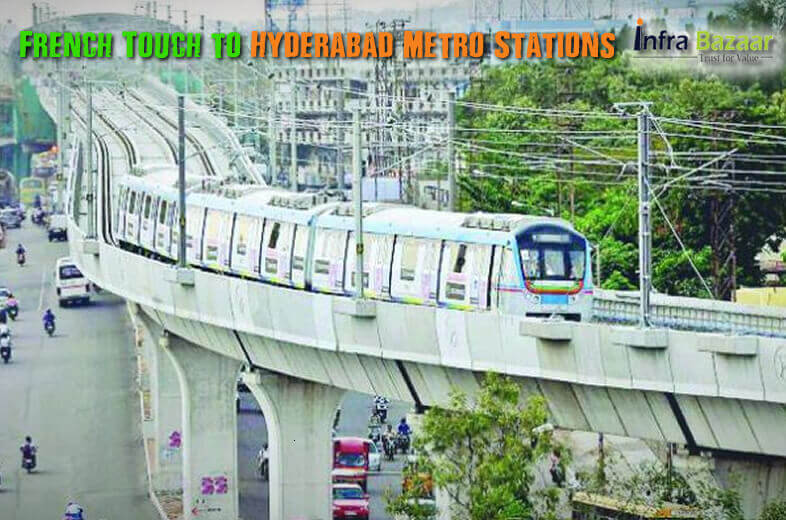 The Hyderabad Metro Rail (HMR) had invited a group of architecture students, professors from Bordeaux, France along with Hyderabad students to come up with ideas to develop the metro rail stations in Hyderabad.

The Reputed French general was in the Nizam’s military, the obelisk of Monsieur Raymond at Moosarambagh, which is still a memory to the visitors. It is planned to receive a fresh lease of life from a French connection.

The Hyderabad Metro Rail (HMR) authorities are using maximum advantage of French artistic and architectural flair to develop Raymond’s tomb into a heritage the area within the walls and also upcoming new market of metro stations at Moosarambagh.

The Hyderabad and French architectural students have come up with amazing ideas to develop the two metro rails stations as heritage tourism points. As both students have common theme and amazing architectural talent, it will also provide inputs to conceptualize and develop Raymond’s tomb around the metro station.

“Ecole D’Architecture De Bordeaux”, “J. Kent Fitzsimons”, architect and professor says the HMR authorities have asked some tough questions on how to develop the city and at the same time how keep its historical flavor alive. As it is a stimulating and challenging work, hopefully we will fulfill it with something tangible in a week.

About 47 architecture colleges in Hyderabad and 13 students from France are taking up part in the project which is being supported by the Architecture and Design Foundation (India), Alliance Francaise and HMR. Based on innovative ideas coming out from the students, the Telangana State Government and HMR will develop these two stations and Raymond’s tomb into a heritage precinct.

“This is an amazing way to integrate heritage and conversation values of Hyderabad with metro rail routes. This help in spreading awareness and re- energizing public spaces, especially in places that have historical value,” says senior architect P. Venu Gopal.

The construction work will be undertaken in two phases. There are six stages of completion in Phase I.

The Phase I includes 3 lines covering a distance of about 71 km. The metro rail stretches between Nagole and Secunderabad around 11 km. It is targeted to be operational by December by 2015. The entire 71 km around 66 stations are in first phase which is to completed by December 2017.

The Government sanctioned second phase of metro rail extending to further 85 km. The routes have proposed as following.