High Speed Rail and How India is paced 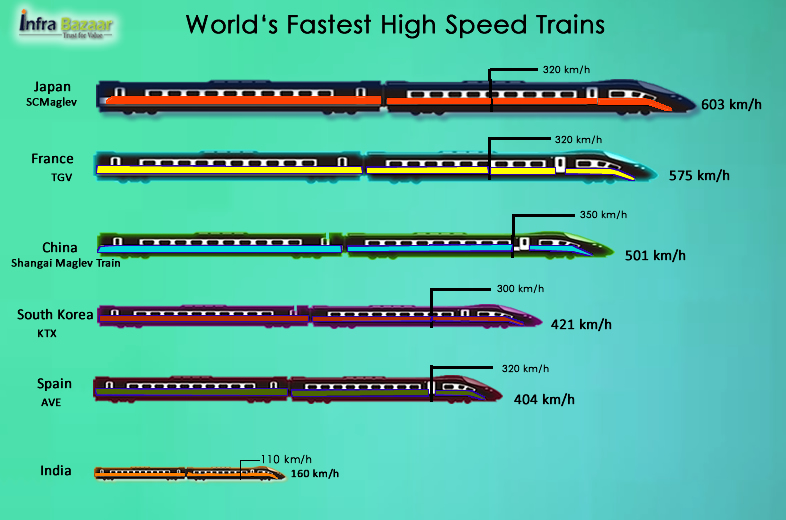 Post World War II, Japanese were all set to prove the world that they are no less than anybody when it comes to technology advancement. With a funding from World Bank of $80 million they set the tune to construct the world’s first high-speed rail network also known as yume no chotokkyu — literally meaning, the “super-express of dreams” on 1st October 1964.

The first line ever built is known as the Shinkansen network, which runs between Tokyo and Osaka, reduced the trip from six-and-a-half hours (on conventional trains) to three hours and 10 minutes, travelling 515 Kms and reaching a top speed of 210 km/h, sustaining an average speed of 162.8 km/h with stops at Nagoya and Kyoto. Today, the Shinkansen network has over 1,487 miles of track, with more set to open in the coming years.

After the big success of the Shinkansen operation, technical progress in several European countries, particularly France, Germany, Italy and UK, developed new technologies and innovations aimed to establish the basis for the "passenger railway of the future". Today many countries have developed high-speed rail to connect major cities across Europe, US and Asia. Some of the other countries those who have successfully implemented HSR are China, Austria, Belgium, Portugal, Russia, South Korea, Sweden, Netherlands, Poland, Spain, Turkey and USA. China has a vast network of 19,000 kilometers of High Speed Rail accounting for almost two-thirds of the world's total network.

Indian Scenario: In India High Speed Rail Corporation of India Limited (HSRC) has been formed on the directions of Ministry of Railways, Government of India, for development and implementation of high speed rail projects. Ministry of Railways directed Rail Vikas Nigam Limited in June 2012 to set up a Special Purpose Vehicle for development and implementation of High Speed Rail Projects in India. HSRC VISION 2020 envisages the following on High Speed Corridors: The first approach would be to raise the speed of segregated passenger corridors on trunk routes using conventional technology to 160 to 200 Kmph. The second approach would be to identify a number of intercity routes, depending on viability, and build state-of-the-art high-speed corridors for speeds up to 350 Kmph through on PPP mode in partnerships with the State Governments. By 2020, at least four corridors of 2000 Kms would be developed and planning for 8 other corridors would be in different stages of progress.

As of now India does not have any line classed as HSR, which allows an operational speed of 200 km/h or more. The fastest train in India is the Gatimaan Express with a top speed of 160 km/h, which runs between Delhi and Agra. Post winning the elections, BJP Government has promised to build the Diamond Quadrilateral project, which would connect the cities Chennai, Delhi, Kolkata, and Mumbai via high-speed rail. India's Prime Minister Narendra Modi approved Japan to build India's first high-speed railway. The planned railway would run around 500 Kms between the cities Mumbai and Ahmadabad, at a top speed of 320 Km/h. Under the Japanese proposal, construction is expected to begin in 2017 and would be completed by 2023. India is expected to have its HSR line operational from 2025 onwards.

Call it government apathy or budget constraints we are at least 60 years behind the Japanese and about 20-25 years behind the Europeans in implementing the HSR technology. Once in place HSR will for sure bring in a new dimension to travelling in train.