Hover-Taxi to be launched in Dubai by July 2017 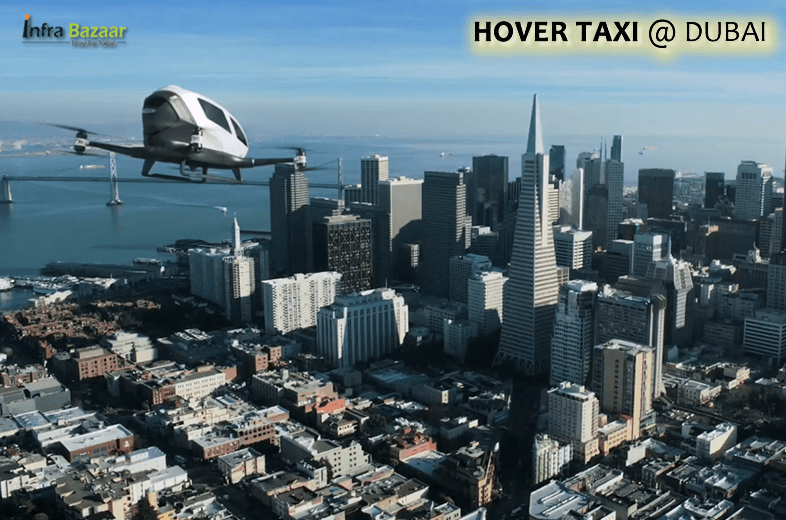 Dubai’s transport authority has said on Monday that they have tested a Chinese prototype of a self-driving hover-taxi. They have plans to introduce the aerial vehicle in the United Arab Emirates by July this year. They have successfully tested the one-man electric vehicle in the city of Dubai in the United Arab Emirates and have laid down ambitious plans to ensure a quarter of its means of transport are self-driving by 2030.

Hover taxis are a form of helicopter that can do vertical takeoff and landing (VTOL) above the ground level with air speed less than 20 knots. However the height may vary and some helicopters may require hovering taxi above 25 ft Above Ground Level (AGL) to reduce ground effect turbulence or provide clearance for other cargo sling loads.

The Dubai’s transport authority have short listed EHang 184 a Chinese make Hover Craft  that can travel on a programmed course at a speed of 100 kilometres per hour or at 60 mph at an altitude of 300 metres or at around 1,000 feet high. EHang 184 is an Autonomous Ariel Vehicle (AAV) is considered to be safe and eco-friendly. It can fly at low altitudes that can solve the problems of medium-short distance travel and transport. The Hover is designed with 100% with green technology and is powered by electricity only. It is designed with full redundancy. In case one set of the power systems are mal-functional the vehicle can still take a normal course and ensure the safety of passengers along with the vehicle. It can recharge in two hours and can fly up to 30 to 40 miles on a single charge of its electrical battery. The flying machine has already been tested with 200-plus successful (non-crashing) test flights which is now ready to take passengers from one destination to another. The drone can accommodate one person weighing up to 220 pounds in its cabin and has a flying ceiling of 11,500 feet.

All a passenger has to do is to simply select a destination and the autonomous taxi will take off, fly the route and touchdown at the chosen spot, which is monitored by the ground control centre that can track and manage the AAVs in flight course. Powered by eight propellers the quad copter has highly accurate sensors and can resist extreme temperatures. While the Emirates are known for their extreme summers and heavy traffic congestions this device will certainly be a boon to them.

The autonomous aerial vehicle which was exhibited at the World Government Summit has already been experimented in the skies of Dubai. The transport authority of Dubai is determined to launch and start operations of the autonomous aerial vehicle by July 2017. UAE has already signed a deal with Hyperloop in last November to study the construction of a near-supersonic transport link to the Emirati capital Abu Dhabi. Dubai is home to some of the world’s most magnificent buildings like the Burj Khalifa, Burj Al Arab, Marina Towers, Princess Towers etc, and a trading hub attracted a record 14.9 million visitors in 2016.

With the new technology in hand the transport sector will see a paradigm shift in easing the vehicular movement and decongesting the traffic. It will bring in a new revolution in faster and safer travels with faster cargo movement also.