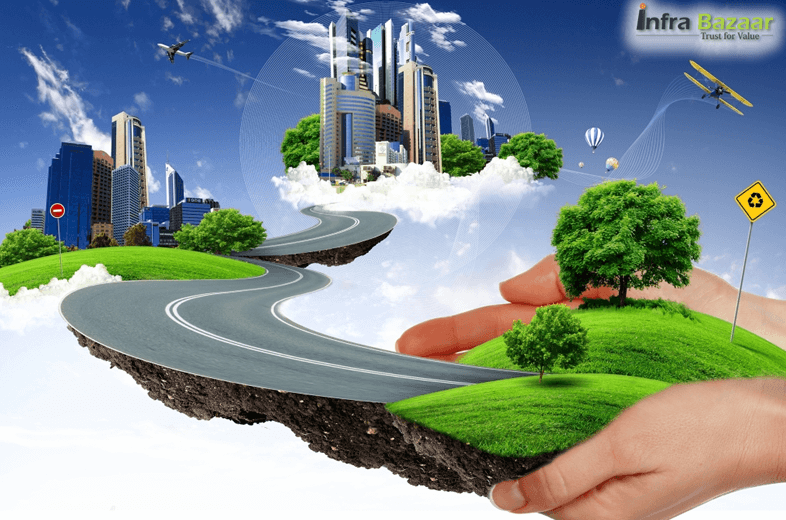 It is responsible for India’s overall development and the Government is intensely focused to ensure the creation of world-class infrastructure in the country. The government has set a target of Rs 25 trillion investments in infrastructure, by allocating Rs 8 trillion for developing 27 industrial clusters, and Rs 5 trillion for the road, railway and port connectivity projects.

The Indian power sector has tremendous investment potential (of US$ 250 billion) and provides immense opportunities for Power Generation, Distribution, Transmission and Equipment. The Central Electricity Authority has investment plans to reach Rs 2.6 lakh crore from 2017-22 and to enhance the transmission capacity by 45,700 Megawatt

The Government of India also has plans to build 8,000 km of pavements and cycle tracks in 106 cities with an investment of Rs 80,000 crore for reducing carbon footprint in urban areas.

The monetization of 75 publicly funded highway projects of Rs 35,600 crore through toll-operate-transfer mode will help to get funds to finance road construction in the highway segment.

The Government of India and the Asian Development Bank have signed US$ 375 million in loans and grants for developing 800 km Visakhapatnam-Chennai Industrial Corridor.

Highway Projects worth US$ 93 billion, and National Highways Building Project (NHDP) with a total investment of US$ 45 billion.

The Government of India has plans for an additional expenditure of Rs 59,978.29 crore for Rural Jobs Scheme, Building Rural Infrastructure, Urban Development and Farm Insurance.

The Ministry of Shipping plans to develop 37 national waterways out of the 111 NWs declared under the National Waterways Act 2016, to impact on the reduction of logistics cost.

The Government of India has a roadmap to complete 23 Priority-I projects, 31 Priority-II projects and 45 Priority-III projects under the Prime Minister Krishi Sinchayee Yojana (PMKSY) and Accelerated Irrigation Benefits Programme (AIBP).

The Government of Karnataka aims to invest Rs 1 trillion to develop irrigation projects to help in reducing the impact of deficient rainfall and drought on agriculture.

Railway expenditure allocation has increased by 8 percent to Rs 1,31,000 crore for laying down 3,500 km of railway lines in 2017-18. The Government of India has plans to invest US$ 137 billion in its rail network.

The Indian Railways plans to set up Railways of India Development Fund- RIDF which will serve to arrange funds from the market to finance infrastructure projects.

The Ministry Of Urban Development has approved the investment of Rs 2,863 crore under the Atal Mission for Rejuvenation and Urban Transformation - AMRUT scheme, for improving basic urban infrastructure.

Airports Authority of India plans to increase its capital expenditure for to Rs 2,500 crore for expanding capacity at 12 airports to accommodate the increased air traffic.

AAI plans to develop city-side infrastructure at 13 regional airports by cooperating with private players for the building of Hotels, Car Parks and Facilities.

The Reserve Bank of India has notified 100% FDI under automatic route in the construction development sector.

With this thrust and monitoring, the role of the Government is effective and makes a large contribution to the overall progress of the sector. This will yield positive effective and lasting results for the present and the future.

Infra Bazaar is a market enabler and ecosystem for infrastructure industry. With a passionate team and innovation lab, we seek to add huge value to the Infrastructure industry through an online portal, data research and mobile apps.for more info visit our website http://www.infrabazaar.com or Flow our Facebook page business.facebook.com.