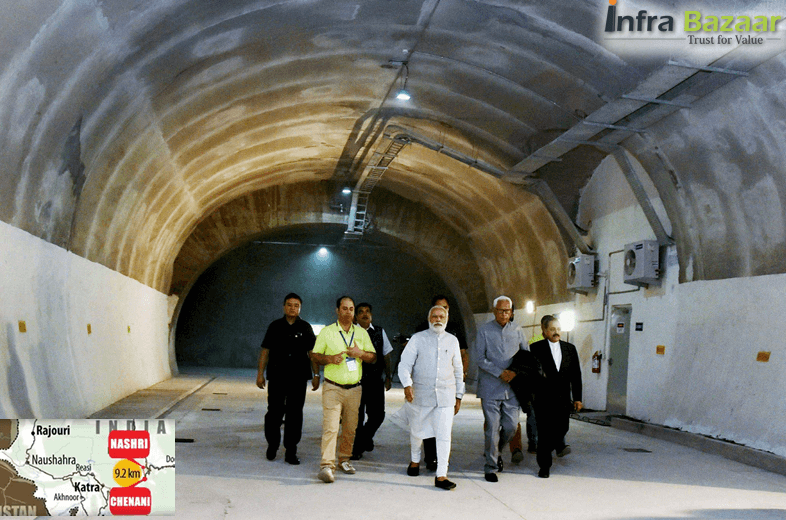 Prime Minister Narendra Modi on April 2nd inaugurated the Chenani - Nashri tunnel, which is India’s longest and Asia’s 6th longest and dedicated to the nation. It is an all-weather route with transverse ventilation system cutting down the Chenani-Nashri distance from from 41 km to 9.2 km. The bi-directional tunnel is built with a budget of 2519 crore that allows travelers to bypass the areas susceptible to landslides (44 avalanche spots). The interesting facts about this tunnel are presented below.

1.    Revenue
The National Highways Authority of India has built the project with a whooping budget of Rs 3,720 crore. As it is an all-weather tunnel, it will boost revenue in the state by increasing both tourism and trade. However because the tunnel bypasses three major halts on the National Highway, the residents of those 3 areas raises objections which were taken into account by J&K government which promised to arrange rehabilitations for small businesses.
Daily fuel savings due to this tunnel would be approximately 27 lakhs, official sources said.

2.    Technology
ABB, which is a global leader in industrial technology, is responsible for the transverse ventilation and other features of the tunnel using ABB drives and ABB software. ABB takes care to maintain clear and fresh air and tolerable co2 levels and to exhaust the harmful vehicle emissions.    For tunnel ventilation which is required for the smooth and safe travel of the passengers, ABB used Variable Speed Drive (VSD) technology for tunnel ventilation.
New Austrian Tunneling Method (NATM) is used for tunnelling process which is currently famous. It is also known as Sequential Excavation Method (SEM).

3.    Specifics
Construction of this longest tunnel began on May 23, 2011. 1500 people worked to make the tunnel a reality, including engineers, geologists, and skilled labourers. It is 9.2km long and a part of the 286 km long 4-laning of Jammu-Srinagar National Highway.  It consists of two tubes 1 is the ‘main tunnel’ and other is the ‘escape tunnel’. Both the tunnels are connected to each other through 29 cross passages at regular distances of 300m. The diameter of the main tunnel is 13m and that of escape tunnel is 6m.

4.    Safety
The tunnel is supported with smart features such as an Integrated Traffic Control System, Surveillance, Ventilation and Broadcast Systems, Fire Fighting System; and SOS call-boxes at every 150 meters. To avoid the problem of Oxygen shortages, the tunnel has several exhaust meters which will check the air quality through the length of the tunnel and regulate the co2 levels. It has parking slots on way in cases of vehicle breakdowns or repairs.
The tunnel is a new boost for transport industry in India, which may lead to many other tunnels that may solve transport issues across the nation.

Infra Bazaar is a market enabler and ecosystem for infrastructure industry. With a passionate team and innovation lab, we seek to add huge value to the Infrastructure industry through an online portal, data research and mobile apps.for more info visit our website http://www.infrabazaar.com or Flow our Facebook page business.facebook.com. ???????