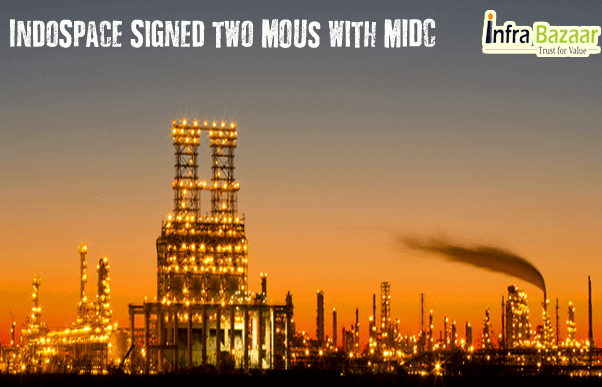 MUMBAI: IndoSpace, India's largest provider of industrial designs for mechanical and logistics parks. It is continuing its support over robust push towards manufacturing across the country and specially Make In India. Following up on the announcement earlier in this week IndoSpace is planning to invest $ 1billion in the upcoming next five years in its own industrial parks comprising of mechanical and logistics parks.  It has marked two Memorandums of Understanding (MOUs) with state-possessed by Maharashtra Industrial Development Corporation (MIDC) for a potential speculation of Rs 768 crore.

The Memorandums of Understandings are for the improvement of tasks at Maharashtra Industrial Development Corporation's Ranjangaon and Chakan modern parks. On finishing the two ventures it will create livelihood for around 4,000 individuals, IndoSpace said in a statement.

The Memorandums of Understandings were marked at the Maharashtra Investment Summit amidst the current week's Make in India drive in Mumbai. These settlements will encourage IndoSpace's proposed speculation at Maharashtra Industrial Development Corporation's Chakan and Ranjangaon parks by empowering vital enrollments, endorsements and clearances required from the concerned divisions according to existing arrangements, principles and regulations of the Government of Maharashtra.

"We are pleased to see the unprecedented endeavors of the Central government and the Maharashtra government, amid the world-class Make in India week in pulling in CEOs of worldwide firms crosswise over various divisions," said Rajesh Jaggi, Co-CEO of IndoSpace and Managing Partner of Everstone Real Estate.

IndoSpace is a joint endeavor between the Everstone Group and US-based Realterm.

"The Government of Maharashtra has been exceptionally steady in our endeavors to create world-class mechanical and logistics foundation in the state, and these Memorandums of Understandings will quickly track venture into these activities, quicken their improvement and pull in more multinational assembling organizations to Maharashtra," said Brian Oravec, CEO of IndoSpace.

The Memorandums of Understandings were marked by Oravec for IndoSpace and by Bhushan Gagrani, CEO, Maharashtra Industrial Development Corporation for the state in the vicinity of Subhash Desai, Minister of Industries and Government of Maharashtra.

Not long ago, IndoSpace declared a proposed speculation of $ 1 billion in India throughout the following five years, which will subsidize the advancement and extension of its own 17 mechanical land ventures the nation over to bolster assembling, shopper and 3PL (outsider logistics) organizations working in the country's quickly developing economy.