Infrastructure and Development of Inland Waterways 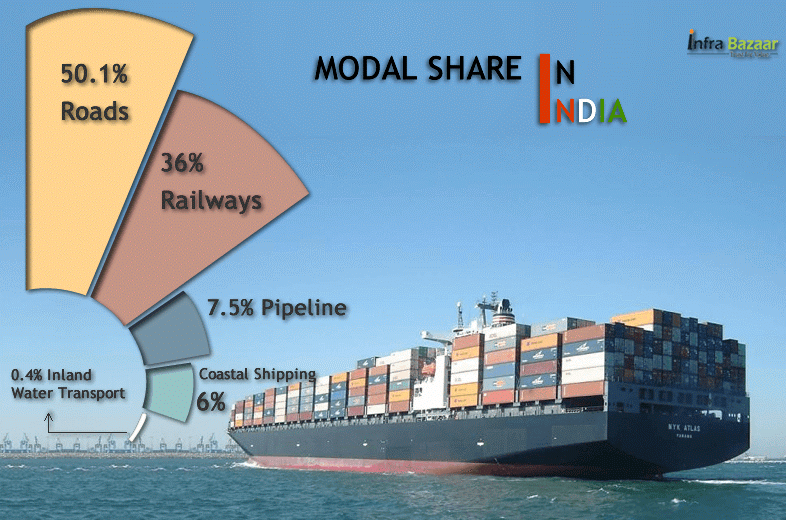 Railways and roads in India are heavily congested and have always enjoyed the attention of policymakers leaving the waterways development to its own fate. Inland Water Transport (IWT) is operationally cheaper, high in fuel efficiency and environment friendly. Thankfully the government has opened its eyes and is ready to exploit this vast potential of waterways that can act as an alternate and supplementary mode of transportation which will not only help to rein the carbon emissions but also curb the rate of road accidents.

The integrated multi-modal transport system envisaged under the National Waterways Bill, 2015, will be proved extremely beneficial to the neglected regions of North-East improving accessibility to the un-commutable areas. India has large number of inland waterways consisting of rivers, canals, backwaters, creeks, and lakes etc. which have the potential and can be developed as an efficient mode of transport network.

IWT is already playing a crucial role in the overall transport in some states like Goa, Kerala, North-East and West Bengal. The current share of IWT in total inland transport is not very significant. To uplift this unexplored area and push the share of IWT, government of India is undertaking various investment projects towards the fairway development, provision for terminals, navigational aids etc.

To actively promote and take IWT sector to newer levels there has to be necessary infrastructure for shipping and navigation and in augmenting the IWT fleet. Large-scale private sector participation should be given a boost to both create an infrastructure and support fleet operations to supplement the government efforts. To attract cargos there has to be necessary infrastructure such as the fleet, fairway, terminals and navigational aids so that the IWT mode becomes more competitive. There should be operational river terminals or river ports with provision to operate mechanized cargo. Government should also set up IWT training institutions to provide adequate training on the subject.

After remaining dormant for a longer period of time IWT is back in focus. Inland Waterways Authority of India (IWAI) under Department of Shipping (DoS), which was constituted in October 1986 for development and regulation of inland waterways for shipping and navigation, had not seen much activity till the March / April 2016. On 9th of March 2016 a bill was passed to re-define the transportation infrastructure in India called the Indian Waterways Bill. The Bill adds 106 inland waterways to the list of national waterways, taking the total number to 111, but there is much more that’s testing ‘Indian waters’. Each inland waterway varies in terms of discharge, sedimentation, river morphology etc. and these parameters influence the type and size of the vessels and the nature of the infrastructure required for them to ply on the waterway.

India has about 14,500 km of navigable waterways and an official estimate states about 34 percent of Indian cargo is currently trans-shipped through international hub ports, resulting in revenue loss for Indian ports as well as raising the costs for the customers. Most EU nations and countries like China have maintained and upgraded their river systems on important routes to support large vessels. Bangladesh has increased its freight movement through waterways to 35 percent. India however, struggles to create depth in its river systems and evolve effective de-silting processes to accommodate even medium or small-sized vessels.

National Waterways (NWs) which are maintained and regulated by IWAI for shipping and navigation have named five waterways namely (i) the Ganga-Bhagirathi-Hoogly river system from Haldia to Allahabad (1620 km),(ii) the Brahmaputra from Dhubri to Sadiya (891 km), (iii)West Coast canal from Kottapuram to Kollam along with Champakara and Udyogmandal canals (205 km), (iv) Kakinada - Pondicherry canals integrated with rivers Godavari and Krishna (1095 km) and (v) East Coast canals along with river Brahmani and Mahanadi delta (621 km), as National Waterway No. 1,2,3,4 & 5 respectively. IWAI is planning and implementing various developmental works on above waterways.

The smaller rivers across have also great potential for being developed as waterways. Therefore, identifying the potential waterways in the region becomes extremely necessary so the waterway development, navigational aids, terminal facilities, etc. can be developed. Integrated development of waterways can generate waterway grid for North Eastern Region that may help in future to shift cargo traffic from road transport to the cheaper and eco-friendly inland waterways. In terms of quantity, inland waterways can move five times more cargo than roadways and railways. The construction and maintenance of the waterways system is also cheaper to build and maintain.

Experts believe that this has both strategic importance and will lead to monetary gain. This may end Colombo’s monopoly in transshipment in South Asia and attract international carriers to operate in Indian waters. Colombo’s China-backed ports have long unnerved India’s strategic community.