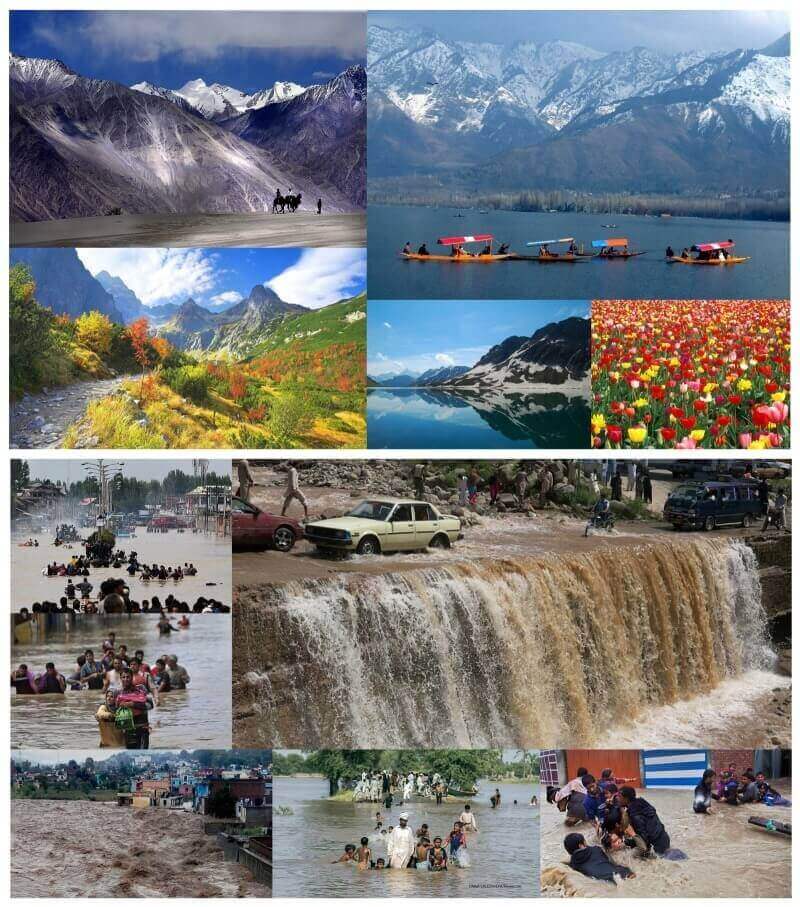 The Jammu and Kashmir are commonly known as Kashmir. Its awe-inspiring and picturesque beauty acquits the quote made by Amir-e-khusro Dehluvi, “agar Firdaus ba-roohe zameen ast, hami asto, hami asto, hami ast.” It means “if there is paradise on earth it is here, it is here, it is here.” Mughals correctly called Kashmir ‘paradise on earth’. Its amazing landscape and scenic beauty leave us under its spell. It is like a tiara of our country. It is a picturesque, fascinating area, known for its beauty, gardens, lakes and docile people. Kashmir is bestowed with breathtaking natural beauty and a lot of history is associated with this place. Some of the highest mountain peak, massive glacier, lakes, river, forest and meadows are integral parts of Kashmir.
Its majesty, poisonous and plentitude of colours make Kashmir one of the best destinations in the world and a paradise where you can get. Its beauty is beyond perfection which makes this place known as Switzerland of the east. This is a land of cherry blossoms, saffron field, sparkling rivers, serene lakes, wildlife and pilgrimages. The traditional houseboat and shikhara add to its beauty. If believed then according to a geological survey Kashmir was once a lake. Water bodies like Dal Lake; Jhelum River has been an integral part of Kashmir. These water bodies played a very important role in development and expansion in Kashmir. Different water channels help in transportation and shikhara played an important role in it.
A lot of planning has been done in past to strengthen the infrastructure of Kashmir and for its development but it is not easy to fight with nature as nature always overpower the man. Srinagar Development Authority Office had made many plans for Kashmir’s development but it is so unfortunate that in spite of all planning still, they didn’t notice the danger. It is well said that we only remember the history of disasters, not the future possibilities may be this was the reason that there was no preparedness. Kashmir is experiencing its worst calamity but we cannot say that it is just because of lack of preparedness or an early warning but because the city planners basically planned according to the past disasters, not future possibilities. But is it really possible that we can avoid such a huge loss of lives if we pay attention to future possibilities, I don’t think so as nowadays climate is changing so abruptly that it is so difficult to observe the phenomenon and plan accordingly. Such devastation cannot be avoided and we pay a huge price as it destroys not only the infrastructure but myriad of lives.
This flood damaged the public infrastructure of approximately six thousand crores including a massive damage to different public infrastructures like bridges, roads, hospitals and other government buildings. Almost fifty small and big bridges have been damaged and might need complete replacement. These damages will take a long time to rebuild as it requires a complete replacement. Complete reconstruction needs approximately five thousand crores. Well, we can’t deny the fact that union government is taking good initiatives in rescuing people and also giving the needed amount for its reconstruction of infrastructure and restoring Kashmir’s beauty.
Well if I say that this was one of the worst calamities that Kashmir suffered, I won’t be wrong. Nature didn’t show any mercy on humankind, in fact, things are going out of hand and a lot of damage has been caused to infrastructure and human lives. Along with government efforts, we people of India should pray for their welfare and survival. in the past, there are many master plans were made for its development and growth but seeing the current condition of Kashmir I feel that it will take decades to develop as of now it needs to reconstruct its natural beauty. Well, time and money will heal the people’s bruises and need but the terror which is imprinted in their mind will not easily fade. But is it possible to restore everything that we lost, nope it will take time maybe decades? We can sympathise with the victims and can pray for them but alas! Without action nothing is possible.