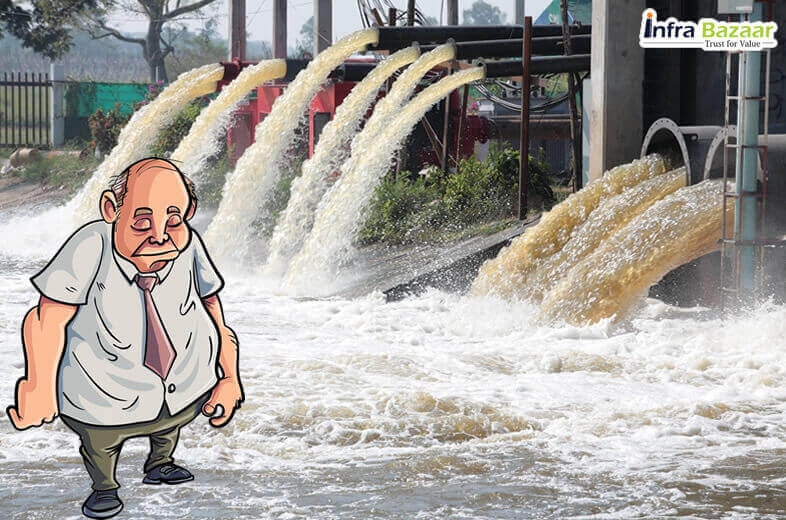 Urban Cities across India generate huge amount of sewage and waste water, which usually flows into the Lakes, Rivers and Ponds. These waste waters turn water resources into polluted water.  Almost 80% of the sewage generated from Urban India doesn’t have the perfect water outlet system. There are very few cities which have underwater system and many of those are also not performing well. Most of the time the underwater outlet system fails and water flows on the roads. This creates health problems to the public and increases the polluted water percentage. End result being ground water is polluted which is creating increment in Nitrate levels in the ground water system.

These figures were revealed at a conference of professionals on sewage and water issues organized by the Centre for Science and Environment as a part of the “Anil Agarwal Dialogues” series.

Vice-President Hamid Ansari said that, “Indian cities are producing approximately 40,000 million liters of sewage per day, enough to irrigate 9 million hectares and we are baring the 20% is treated,” in the conference. He said the untreated waste water is seeping into our water sources, “thereby ticking a health bomb amongst our people. “Almost half of the Urban Indian population are still dependent upon ground water sources for Drinking, Cooking and Bathing this will effect directly the people put them under high health risk. The risk factor is more dangerous than the past,” explained by Sunita Narain – Director General of CSE (Centre of Science and Environment).

Other officials who work in the Sewage–Water department shared the details of the situation, which indicates water-sewage system in Urban India is getting to a worrisome point. They warned that the country is facing a more complicated challenge as the process of urbanization will still leave the millions in the villages who would depend upon the rivers, lakes, ponds and ground water systems.

Tushar Shah of International Water Management Institute said India is in first place which has the highest percentage Ground Water systems, where almost 80% of the population is dependent on it. Almost all Indians want to create their own supply for their personal consumption. The lack of focus on the water-sewage system has led to a position where a single source i.e ground water can’t cover all of the population in the country. We have only 4 Cities which are perfectly maintaining 70% of the population within closed drains in their locations, those cities are Pune, Chennai, Surat and Gurgaon. In almost all cities the sewage outlets are polluting the water resources.

Almost 40% of the sewage is successfully cleaned by two cities amongst all in our country, those are Delhi and Mumbai. Class I and II towns – which are expected to grow and absorb the most of the migration in the future, are beaming worst possible condition. Untreated water sewage flowing into the water resources and the count of the sewage outlets have doubled in the recent years, which account up to 12,000 million liters to 25,000 million liters per day in Class I and II towns in the country.

There are 302 Class I cities and 467 Class II towns with no sewage treatment facilities across India. Of the 21% sewage passing through the treatment plants in B towns, only 60% get the sewage treatments which meet the requirement standards.

As we are progressing into the smarter cities era these things cannot be ignored and should be given utmost priority. Not only there is a need to cater to the health and hygiene of our people but also make conducive environment for our future generations to come.