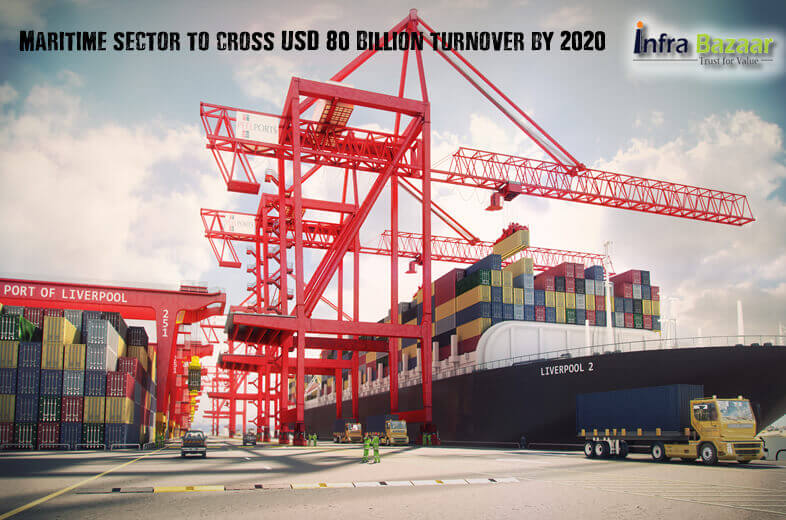 India's maritime business is set to grow 20 per cent annually to reach USD 80 billion by 2020, as per Indian Registrar of Shipping.

India has 12 major and 187 non-major ports. Cargo traffic, which recorded 1,052 million metric tonnes (MMT) in 2015, is expected to reach 1,758 MMT by 2017. The Indian ports and shipping industry plays a vital role in sustaining growth in the country’s trade and commerce. India is the sixteenth largest maritime country in the world, with a coastline of about 7,517 km. The Indian Government plays an important role in supporting the ports sector. It has allowed Foreign Direct Investment (FDI) of up to 100 per cent under the automatic route for port and harbour construction and maintenance projects. It has also facilitated a 10-year tax holiday to enterprises that develop, maintain and operate ports, inland waterways and inland ports.

Indian government has announced a combined USD 110 billion package to develop its ports and ship-building industry by 2020 and against a background of globalisation and liberalisation, the global shipping industry has increasingly started looking to India for ship-building, ship repair and many other services, he said.

The handling capacity of major ports in India is sufficient to match trade demand. The capacity of all the major ports as on March 31, 2015 was 871.52 MMT, compared with 581.54 MMT in cargo traffic handled through 2014–15. Thus, the capacity utilisation through 2014–15 was around 66 per cent. Furthermore, as per internationally-accepted norms, the gap between traffic and capacity is usually around 30 per cent. Additionally, the government has taken several measures to improve operational efficiency through mechanisation, deepening the draft and speedy evacuations.

According to the latest provisional data from Indian Ports Association, the publicly-owned major ports in India reported healthier levels of growth in container throughput in FY 2014–15 than in the previous year. Container-handling in FY 2015 expanded 6.7 per cent year-over-year to 8 million twenty foot-equivalent units (TEUs) from 7.46 million TEUs through the same period in 2013–14. The data also showed that containerised cargo tonnage grew 4 per cent to 119 million tons.

The Department of Industrial Policy and Promotion (DIPP), Ministry of Commerce and Industry, reported that the Indian ports sector received FDI worth US$ 1,637.3 million between April 2000 and May 2015. The ports sector was also awarded 30 projects in FY14, investing over Rs 20,000 crore (US$ 3.16 billion), which is a threefold increase over the preceding year.

The Indian maritime sector - which handles 90 per cent of India's International trade - facilitates not only transportation of national and international cargo but also provides a variety of other services such as cargo handling services, ship-building and ship repairing, freight forwarding, lighthouse facilities and training of marine personnel.