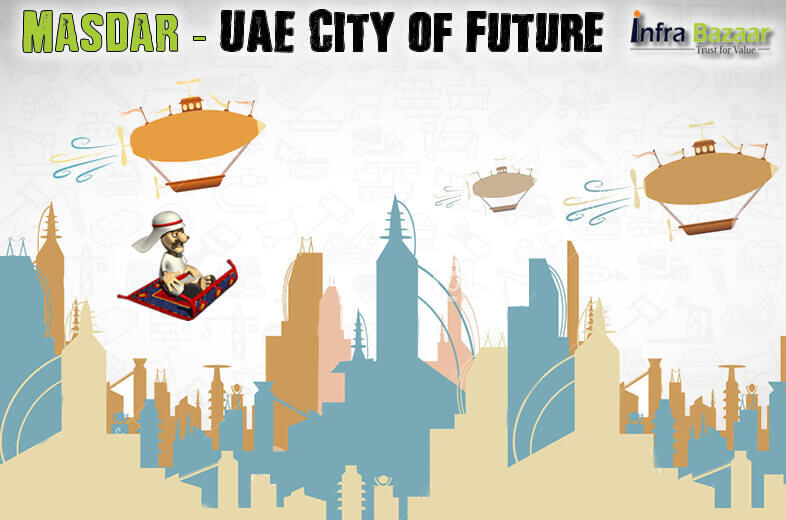 Introduction: Masdar City is the world's first zero-carbon and zero-waste city which is being built in Abu Dhabi, the capital of United Arab Emirates. The city is built by Madar, a subsidiary of Mubadala Development Company which is owned by Abu Dhabi government. The meaning of name “Masdar “means “the source “in Arabic.

Masdar City is built in six square kilometers will become home to 1500 businesses and 50000 residents. Top minds in the field of sustainable and substitute energy are working in the project. The city will rely entirely on solar energy and other renewable energy sources.

The World’s First Zero-Carbon, Zero-Waste City: Masdar city is designed as world’s first zero carbon, zero waste, car free city. The complete city relies on renewable energy source generated by photovoltaic panels. The usage of energy will be reduced by 75% compared to conventional urban community of the same size. Landscaping within the city and crops grown outside the walled city will be irrigated with grey water and waste water produced will be treated before usage by the city’s water treatment plant. The complete city will use different up to date technologies to reduce its emission and waste.

The Masdar City has received the first “World Clean Energy Award” from the Transatlantic 21 Association Basel, Switzerland in June 2007. In the same year the city designed was voted as “Sustainable Region/ City of the Year” at Euro money and Ernst & Young’s Global Renewable Energy Awards.

Masdar City is heading the project on “Present Living Planet” – a global initiative launched by WWF to prove that it is possible to live within ecological limits and improve the quality of life. The headquarters of the International Renewable Energy Agency (IRENA) located in Masdar City, will be the first building in history to produce more energy than it consumes.

Transportation System: The Transportation system was designed to be underneath the city streets. Complete traditional motor vehicles are banned in the city. The initial plan of transportation included the use of electric powered vehicles called Personal Rapid Transit (PRT) for traveler and Freight Rapid Transit (FRT) for goods. This allows the designers to build narrow shaded streets which help funnel cooler breezes across the city. These are magnetically controlled driverless vehicles.

Conclusion: Masdar provides friendly environment by giving incentives and monetizing reduced greenhouse gas emissions, in compliance with the Clean Development Mechanism (CDM) framework of the Kyoto Protocol. Masdar views the CDM as an exceptional opportunity for Abu Dhabi to lead sustainable growth in the region and to simultaneously address global environmental concerns. Masdar is developing large scale energy and technology projects to drive leadership in substitute energy and to support the economic diversification of Abu Dhabi. These projects include alternative Solar Thermal Energy, Energy Power Plants and Photovoltaic (PV) research.