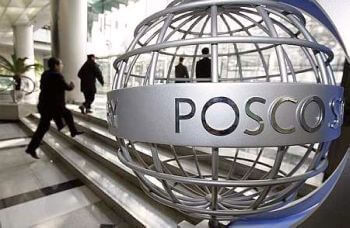 Posco Steel, the South Korean steel giant, is seeking a refund from a rail line project which is to be setup in partnership with the Odisha government. The company is citing a change in their company's law to seek refund.

Odisha government, Posco, SAIL, Rail Vikas Nigam and some other private players have formed a 590 crore rupees SPV back in 2006 to undertake a 78 kilometer long rail line project between Paradip and Haridaspur.

Posco said it can’t keep the deposit any further, with respect to the changed company law. Posco also said that it is only asking a refund from the rail infra fund, and confirmed it is not pulling out from the prestigious USD 12 billion steel project in Odisha.

The company denied the reports that is withdrawing from the big billion project, stating “"We are still on Odisha project. Money refund is not for the steel plant land. Rail Infra refund is as per the changed company law last year."

The company also said the recent employee resignations are voluntary, and have nothing to do with the reports.

Posco had an understanding with Odisha state government in building a 12 MTPA steel plant in the state, which hasn’t moved forward for over a decade due to regulatory hurdles.