Singapore firms invited to invest in Navratna PSUs by Modi 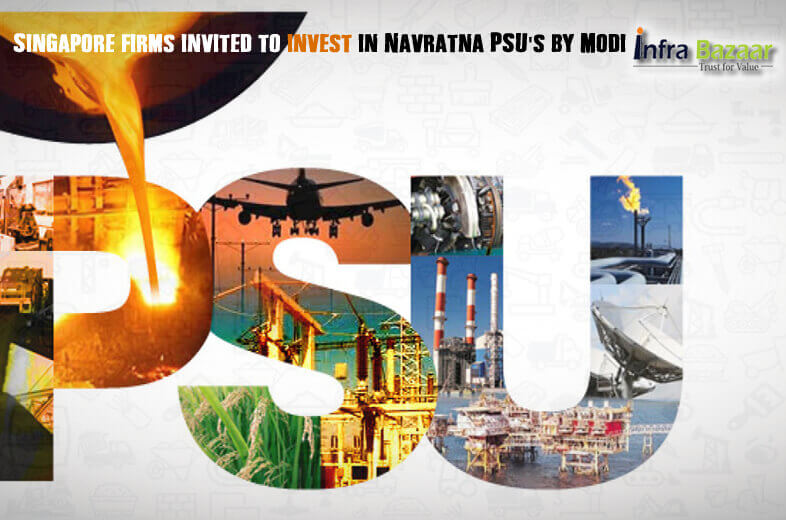 The Indian Prime Minister Sri Narendra Modi has invited investors to participate in the proposed divestment of Navratna Public Sector Undertaking in India and required the Singaporean government’s help in building at least 20 smart cities.

Modi stressed in wide vary discussions on the idea to “create many Singapores” within the India, and also inclined for issuance of rupee bonds and infrastructure bonds in Singapore during the discussions with Singapore Prime Minster Lee Hsien Loong and President Tony Tan Keng, with Singapore leaders.

In addition, Modi desire faster completion of Regional Comprehensive Economic Partnership (RCEP) to create a new economic block within Asia. He also invited his Singaporean counterpart to visit India, especially Gujarat to see with his entire family of Asiatic lion, which forms part of the symbol of Singapore. The Singapore government desired doubling of flights to India while Modi wanted the city, state to play a key role in up-gradation of railway stations in India.

The Ministry of External Affairs, Secretary (East) Anil Wadhwa said in the media conference about 14-15 key issues including skills development, tourism, urban development, civil aviation, and financial services which were discussed by Prime Minister Modi. Wadhwa further said: "The talks covered a wide range of areas including defense and services, culture, economic cooperation and financial services. Singapore also returned a statue of Uma Parmeshwari, which belonged to India." According to him, Prime Minister said that if 'Make in India' is to succeed then skills up gradation is very important.

PSUs are classified into three categories - Maharatna, Navratna and Miniratna - mainly based on financial criteria to give them greater operational autonomy. In this conference they also discussed about disinvestment of Navranta Public Sector Under taking, Modi have invited Singapore companies to take part in the disinvestment of these companies, Additionally India is looking to selling stakes in Public Sector Undertakings to rise around Rs 70,000 crore in the current fiscal.

"Prime Minister also said that Singapore can contribute a lot in urban development in India. The government has announced plans to build 100 smart cities and Singapore can work on building at least 20 of them," he said.