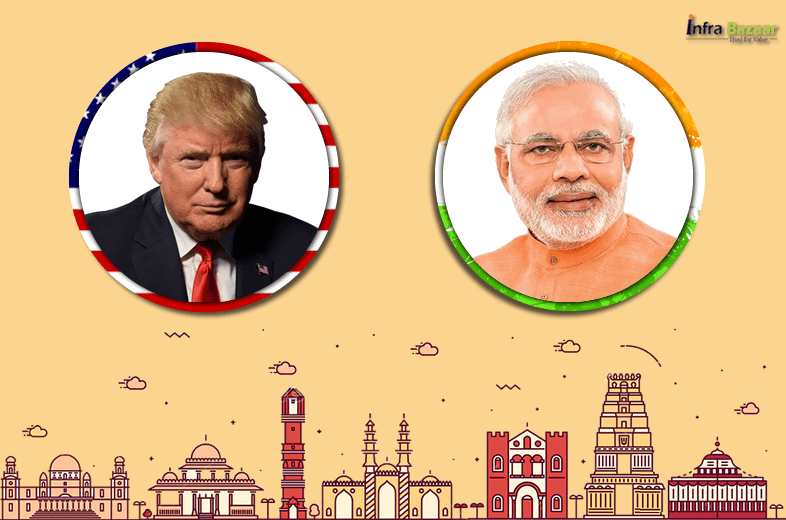 During the visit of President Obama to New Delhi in January 2015, it was announced to elevate the U.S.-India Strategic Dialogue to a Strategic and Commercial Dialogue (S&CD) along with his counterpart Prime Minister Modi. There was a call initiate commitment to strengthen the bilateral commercial and economic partnership.

A smart city should have better infrastructure and provide a good quality of life. It should provide a clean and sustainable environment by applying some smart thoughts implementing smart solutions. Creating efficient green building with smart traffic management solutions, providing better water quality, having wastewater treatment plants, usage of renewable sources of energy with smart meters are some of the mandatory requirements of a smart city. India’s current infrastructure requirement is approximately estimated at around $1.5 to $2 trillion. These infrastructure projects across the country are supposed to be funded by the central and state governments as well as participation from private sector capital through PPP mode, over the next couple of years.

Since US is recognized for its cutting-edge U.S. technologies, products and services, the Government of India had invited them to take the lead in developing three Smart Cities in India: Ajmer in Rajasthan; Allahabad in Uttar Pradesh; and Vishakhapatnam in Andhra Pradesh.

Deputy Secretary of Commerce Bruce Andrews had led a delegation of 18 U.S. companies on a Smart Cities Infrastructure Business Development Mission to India. During the third Smart Cities Summit in Mumbai, Deputy Secretary Andrews had said that they wanted to be partners of India because India's success is critical to the future of both the global economy and the world's fight to address climate change. They want to work together because they can help India to build a foundation for a green future, for a sustainable environment and during the process they can show to the world as how the 21st Centuries cities are built.

However, with the change in administration in the US there was always a question mark if the new government would participate in the same enthusiasm. As per a US government official the change in office will not hamper the smart city projects and they will continue to engage with India for the same.

Vinay Vijay Singh, deputy assistant secretary in the US Department of Commerce in an interview to said to ET that they have had initial discussions with the transition team of the Trump camp. Though it is still early stages but government of India has shared its plans and it has been included. Mr. Singh also said that Indian cities should be given more autonomy to work. The arrangement between the Centre and States should be more transparent and need to be carried out faster.

He said Indian government is working hard by conducting competitions, events and even money has gone to the states but when they approach states they claim that money has not yet reached them. Some other companies already involved in India’s smart cities project have also cited similar issues.

Singh had also said that US participation in development of smart cities in India is not a political initiative and the agenda is driven by the US private sector as they see this as a growth area. He also said that they will continue to engage with all stakeholders and will work with multilateral institutions to help eliminate the initial risk involved in smart cities project. He cited an example as how of Pune Municipal Corporation could raise funds via issuance of bonds with the help of US government’s Department of Treasury’s initiative.

Devin Hampton, chief of staff for US Trade & Development Agency, said the focus areas for smart cities are in energy, telecom and transportation sector and they will help identify better opportunities which are important. He also said there should be cities to cities contact and knowledge sharing for greater synergy on best practices. He said, a special cell in India on US investments similar to that of Japan could also help.