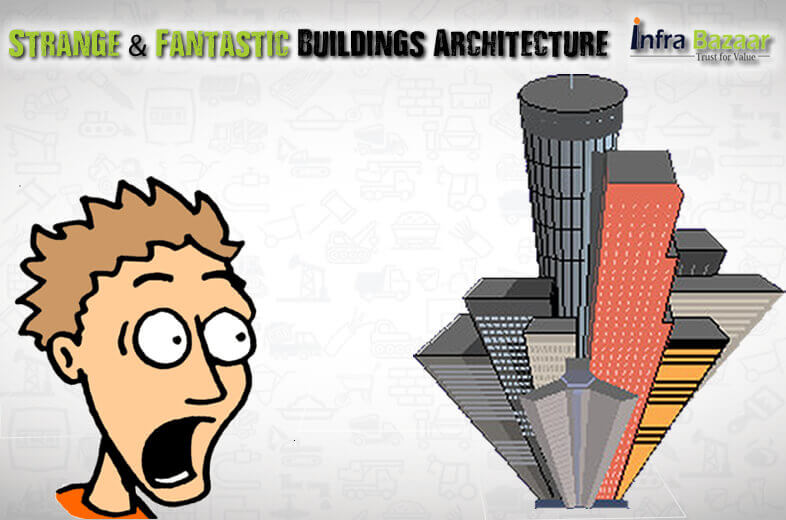 1. The Crooked House (Sopot, Poland): The Crooked Little house is also referred as “Krzywy Domek”, with an extraordinarily shaped building in Sopot, Poland. Crooked house was built in 2004; it is approximately 4,000 square meters in size and it is a part of Rezydent Shopping Center. Crooked House was designed by Szotynscy & Zaleski who were inspired by the fairytale illustrations and drawings of Jan Marcin Szancer and Per Dahlberg.

2. Museum of Contemporary Art (Niteroi, Brazil): The Museum of Contemporary Art Museum is located at Niteroi, Brazil. It is one of the city’s most important landmarks. The project was completed in 1996, designed by Oscar Niemeyer with assistance of structural engineer Bruno Contarini, the height of MAC is about 16 meters high and its rounded dome is of 50 meters in diameter with three floors. The complete museum project is about 817 square meters (8,790 sq ft) with reflecting pool that surrounds by a cylindrical base “like an flower” in the word of Niemeyer.

3. ING Headquarters (Amsterdam, Netherlands): ING house is the Headquarters of ING Group, located at Amsterdam, Netherlands. The construction which took place from November 1999 to September 2002 was undertaken by Hejimans. ING house was constructed like a table on 16 angled street legs, each angles are independent of each other, resting on pins in large concrete blocks in the ground, an amazing technique which is also found in bridge construction.

4. Dancing Building (Prague, Czech Republic): The Dancing Building is also referred to as Fred and Ginger. These nicknames were given by Nationale-Nederlanden. The dancing building designed by Croatian- Czech architect Vlado Milunic in co-operation with Canadian American architect. The building was designed in 1992 and completed in 1996. The building style is known as deconstructivist architecture due to its unusual shape. Each shape of dancing building is supported by 99 concrete panels with different dimensions.

5. Druzhba Holiday Center (Yalta, Ukraine): The Hotel, Druzhba Holiday Center, is located at Yalta, Ukraine. The Druzhba was built in 1984 by Ukrainian architect Igor Vasilevsky. The building structure is like cylindrical stands on a hill overlooking a beach with an exclusive resort town. Guest can enter through the extension encased in a glass tube then after that dive into the complex, which is underpinned on huge legs lodging the lifts and stairs.

6. Lotus Temple (Delhi, India): Lotus temple is one of most amazing architecture, historical importance and great attractions of New Delhi; Lotus temple is also referred as “Bahai Temple”. The construction of this temple was completed in 1986. The construction of this temple took 10 years to complete. About 800 people worked to construct the temple including various team technicians, engineers and workers. Outside this temple there are nine reflecting pools. White marble is used to construct the temple. Height of the lotus temple is about 40 meters. It was built by Persian architect Fariborz Sahba from Canada with some awesome architecture and design.

8. Upside Down House (Szymbark, Poland): The Upside down house stands on its roof. The Upside down house evokes a strange feeling where visitors can walk on the ceilings which are decorated on the socialist style of 1970’s. The complete interior is furnished in the style of Socialist realism. To build this house it took longer time with a higher cost comparing to the normal house of this size. The building foundation alone required about 200m³of concrete. Upside Down house is not only the attraction of the center but also world’s longest plank can be found here about 36.83m long which weighs 1.1 tons and is registered in the Guinness Books of records.

9. The Basket Building (Ohio, USA): The Longaberger Company is an American manufacturer and distributor of wood baskets handcrafted maple and home in lifestyle products. In 1998, Longaberger home office received a Build Ohio Award for its synthetic plaster system. With a unique look, the building construction was completed in December 1997 and the building has been company’s head quarters.

10. The Ufo House (Sanjhih, Taiwan): The Sanzhi UFO house is also referred as Sanzhi Pod house or Sanzhi pod city is located at Sanjhih, Taiwan. This building is set to abandon as pod shaped building. The UFO Houses were constructed beginiging in 1978 and they were intended as vacation resort in part of northern cost adjacent to Tamsui. The building is owned by Hung Kuo Group. While this project was abandoned in 1980 due to investment losses several car accident deaths and suicides were also reported during the construction.