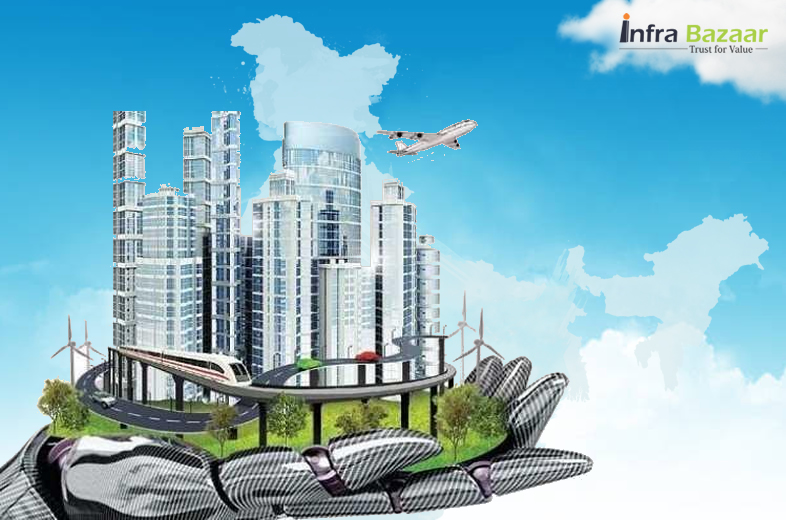 It became the India’s first airport to run on solar power in August 2015. The airport has photovoltaic (PV) panels laid across 45 acres near the cargo complex. The airport can avail 50,000 to 60,000 units of electricity per day through these panels which is sufficient for all its functions. This has technically made the airport “absolutely power neutral.” The implementation of this 12MWp solar power project cost Rs. 62 crore and took six months to complete. It has been set up by Bosch Ltd., Bangalore, and has a capacity to produce 18 million units of power annually.

Starting with the first metro being built in Kolkata in 1984, metros have become lifelines in some of the major cities in India. Named one of the top 100 strategic global infrastructure projects at the Global Infrastructure Leadership Forum held in New York, the Hyderabad Metro Rail project is the world’s largest project under public-private partnership. It is also the world’s largest elevated metro and is expected to provide transportation to over 1.7 million commuters by 2017.

The expressway which connects New Delhi with Agra is India’s longest motorway. This 165 kilometer, six-lane expressway was opened in 2012 and has dramatically reduced the travel time between the two cities; it now takes only a little over two hours to get from Delhi to the Taj Mahal. The project was featured in the list of world’s top 100 innovative infrastructure projects, prepared by KPMG.

This is India’s first solar park. This group of solar parks constructed in Gujarat makes the state Asia’s largest solar park hub. Spread across 5,000 acres, with a capacity of 500 MW, the park can generate both solar and wind energy. Operational since 2013, it hosts 19 different projects by different developers, including Alex Astral, US-based Sun Edison, Lanco Solar, Roha Dyechem, and GMR.

India’s second largest flyover, Mumbai’s Eastern Freeway, is an amazing piece of engineering and design. It connects P D’Mello Road in South Mumbai to the Eastern Express Highway (EEH) at Ghatkopar. The 16.8 km long freeway became operational in June 2013 and is believed to support over 25,000 vehicles daily. Commuters can enter the flyover from eight points. Also, the flyover has enabled commuters to enjoy the 20 minutes road journey from CST to Chembur.

The tunnel that connects Bichleri Valley of Banihal with Qazigund area of Kashmir Valley is India’s longest railway tunnel. It is also the second longest tunnel in Asia. The tunnel, which became operational in June 2013, is 11 kms long and is located in the Pir Panjal mountain range. The ambitious and difficult project took seven years to complete with the hard work of 150 engineers and 1,300 workers. The USP of the tunnel is the use of the New Austrian Tunnelling Method (NATM) of construction. The project cost was around Rs. 1,700 crore.

Work is in progress at the interceptor sewage system on Yamuna River. Delhi Jal Board (DJB) has come up with a solution to keep the river clean by implementing the Interceptor sewage system on three major drains – Najafgarh, Supplementary and Shahadra drains. This Rs. 1,357 crore project diverts the sewage to treatment plants so that the river’s water can be used for other purposes like horticulture and cleaning. The system captures sewage from the 1,600 unauthorized colonies through 600 mm to 2,400 mm wide pipes.

Oil and Natural Gas Corp (ONGC) Petro additions Limited’s (OPaL) mega petrochemical complex at Dahej will be used to manufacture polymers along with products like detergent bottles, milk jugs, water pipes, etc. It will also export products to countries like China, Singapore, Turkey, Africa, Pakistan, etc. The construction of the project was started in 2009 and it was expected to be ready by 2013, but was delayed. The officials claim that the plant was mechanically completed by April 2015 and one of the units commissioned in June. Other units of the plant will also be commissioned soon. The entire plant is expected to start operations by end of 2015.

Spread over an area of 37 acres, it is the second largest bus station in Asia and is also accredited with the ISO 9001:2000 quality certification for its efficient management and functioning. Opened in 2002, this terminus has the capacity to handle 2,000 buses and 200,000 passengers daily. The bus station has 64 CCTV cameras and a ‘child-friendly’ centre for lost kids. The huge parking lot can accommodate over 2,500 two and four wheelers.