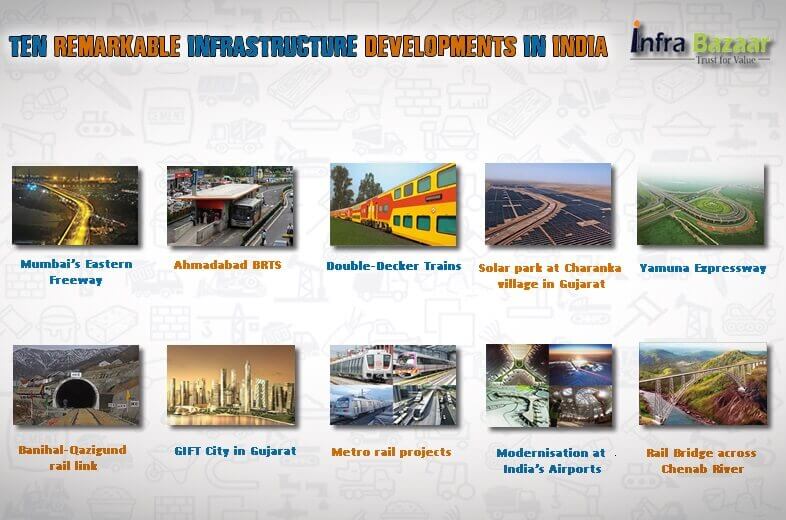 10. Mumbai's Eastern Freeway - India's second largest flyover: The Mumbai’s Eastern Freeway is a Dubbed an engineering marvel, opened in June 2013 from Orange gate to Panjarpol. About 25,000 vehicles are expected to take the freeway daily, it’s the longest freeway elevated road in urban area of the country. This bridge consists of 313 pillars and 3,340 segments.

The bridge is completely divided into three parts, the first one is about 9.29 km elevated road, second one 4.3km road tunnel flyover elevated about 2.5km flyover from Panjar pol to Mankhurd-Ghatopar Road via Govandi. The Mumbai eastern freeway is most ambitious project and much awaited project in terms decongestion as the freeway is expected to decongest entire eastern road corridor of the city.

9. Indore's BRTS - Built on the pattern of Ahmadabad BRTS: The Ahmedabad BRTS started as a pilot project about 12.5 kilometers stretch in July 2009, the BRTS road route was built at the cost of Rs 135 Crore and it consists of physically separated bus lane enclosed same as like metro stations. This project bus corridor will eventually cover distance about 120.46kms. The fair collection system will include smart cards. However the planned commuting system can reduce emissions and improve quality air as well with positive impact on urban development.

8. Double-Decker Trains: India’s first superfast double-decker train was flagged off; it has been introduced in many routes. The much awaited double-decker air conditioned train started in April 25, 2013, between Chennai and Bangalore where seat availability is in high demand. In each and every row bottle holders are provided, wind screens, push back seat, charging socket and in two decks food trays are attached at the back of the every seat.

7. India's first solar park at Charanka village in Gujarat: India’s first Solar Park started at Charanaka Village in Gujarat, April 2012. The Solar power park is spread across 5,000 acres and it has 500 MW of power generation capacity from both wind and solar energy. Gujarat accounts for 66% of India’s total solar power. In Addition to it, it also created employment opportunity to local people of Gujarat; they provide training on how to work at solar parks.

6. Yamuna Expressway: The Yamuna Expressway one of the world’s longest access controlled six lane inflexible pavements in India. By travelling on Yamuna Expressway, the fastest transportation passage between Delhi and Agra, it’s just take 90minutes to drive from Greater Noida to Agra.

5. Banihal-Qazigund rail link through India's longest railway tunnel: The Banihal- Qazigund Rail link is one of India’s longest railway tunnels. First line is about 11 km long tunnel across the treacherous Pir Panjal mountain range in Jammu and Kashmir, the second is about 18km long connecting to Kashmir Valley with Jammu region. It is Asia’s second largest transport passage in India.

The Tunnel is completely water proof and prepared with a high fire fighting system, it also reduces the traveling time between the two places Banihal and Qazigund comprehensively. By road it takes approximately 35km and by train it been reduces to 17.5km.

The Gift city project is about Rs 60,000 crore and the project is expected to create over 10 lakh new jobs.

The first Indian metro rail started its operation in 1984 in Kolkata. This project was followed by successful operations in Delhi Metro. While in cities like Hyderabad, Gurgaon, Jaipur, Chennai, Kochi and Mumbai metro trains are soon to be launched

2. Modernisation Underway at India's Airports: The Indian government is to spend billions of money to make the air journey pleasurable and delightful for visitors to the airport. India with the gleaming T3 Terminal in Delhi is getting ready with the help of AAI initiating up gradation works and air space navigation of air ports has been developing with advance technology.

About 1,315 meter long engineering marvel would boast of several unique features. The bridge would ensure withstands explosion and seismic activities, while the signaling system arrangements would ensure that the train does not encounter high wind velocity at the height.