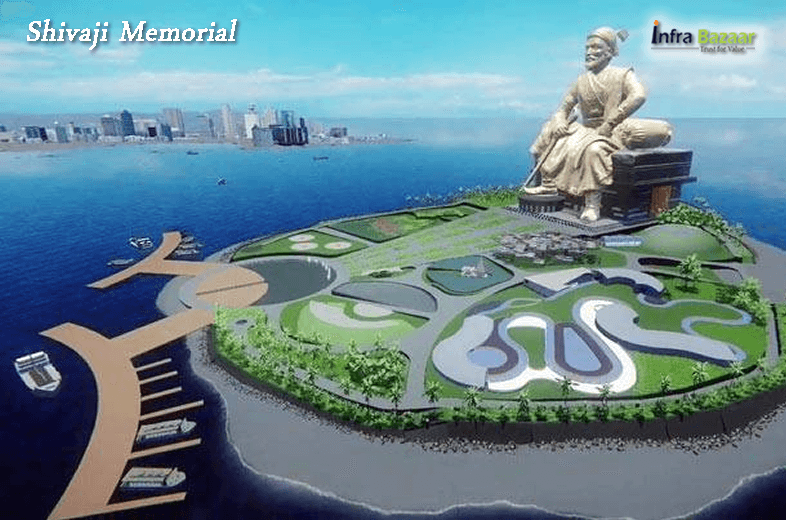 Prime Minister Narendra Modi’s pet project Shivaji Memorial in the Arabian Sea has witnessed active interest among 3 bidders to be a part of the project. Since the laying of foundation stone for the project on 24th December 2016, there has been substantial progress on the project. Of the 13 companies that had come forward for bidding 3 have been shortlisted to undertake the work for Phase-1 of the project.

Maharashtra Chief Minister Devendra Fadnavis recently said the 'Shiv Smarak' to be built as a memorial for the Maratha warrior king Chhatrapati Shivaji Maharaj will not only be the tallest memorial in the country, but in the entire world.

The mega project is to be built at a cost of Rs 3,600 crore. The Shivaji statue will be 192m tall, with the height of the actual sculpture of the Maratha warrior king in an equestrian pose being 114.4m and the pedestal on which it stands being 77.6m. The height of the iconic statue will be taller than the Statue of Liberty. The approximate area under which the project will be built is 15.96 hectares. The memorial will accommodate around 3000 visitors at a time, post completion.

The other facilities proposed at the site are a state of the art museum containing artifacts used by Shivaji and extracts of his inspirational writings. An amphitheatre and auditorium is also proposed at the site that can accommodate a seating capacity 500 and 2000 respectively with back stage facilities. An exhibition gallery is proposed in which life panorama of Shivaji will be displayed by artistic murals. A marine aquarium, water adventure sports with sound and light shows. Common facilities will be provided such as reception, cafeteria, lavatories, book stalls etc for visitors. A viewing gallery at the apex of statue, along with a helipad is also proposed.

Three companies have put in their bids and formally entered the race to build the showpiece, which is a politically significant project. BJP-led Maharashtra government has received bids from Larsen & Toubro, Reliance Infrastructure and Afcons Infrastructure to design and build the grand memorial. Incidentally, Larsen & Toubro, which has bid for the Chhatrapati Shivaji memorial project, has won the contract for the Statue of Unity, a 182 metre-statue of Sardar Vallabhai Patel in Gujarat. Government plans to build the memorial in two phases with the first phase estimated at Rs 2500 crores and Rs 1,100 crore for the second phase.

If all goes as intended, the world's tallest statue will come up on Mumbai city's coastline by the end of 2020.