Top 10 Ancient Marvels of the World 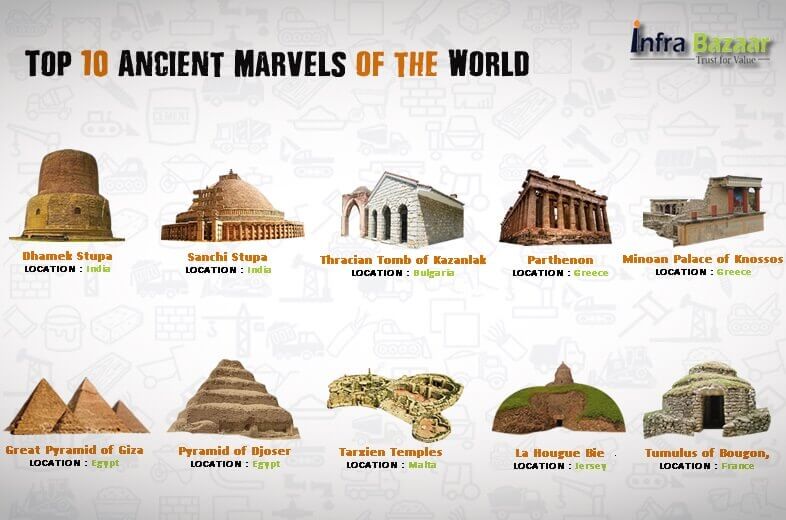 The world’s top 10 oldest constructions which are defined as man-made structures used or planned to support sheltering for continuous occupancy; we present you with a list of such buildings, which are believed to be the ancient marvels. The list of 10 oldest extant self-supporting building constructed in the world which are the masterwork of skill and handwork of the people of that era, today’s generation people would be surprised to see these wonders. Without the usage of any modern technology and machine, how these great the constructions were made.

Dhamek Stupa is an enormous Stupa, located at Sarnath, about 13kms away from the Varanasi in the state of Uttar Pradesh. Dhamek Stupa was built in 500 BC. The great Mauryan king Ashoka was to replace an earlier structure commissioned in 249 BC, along with several other monuments, to honor Buddha’s activities in this location in this. Stupas originated as round mounds encircled with huge stones. King Ashoka has built Stupas to protect small pieces of calcinated bone and other remaining of the Buddha and his disciples.

The Great Sanchi Stupa is one of the oldest stone structure in India was formerly commissioned by the emperor Ashoka in 3rd Century BC. Its core was simple hemispherical brick structure built over the relics of the Buddha. Sanchi Stupa has four liberally carved ornamental gateways and a barrier encircling the whole structure. Ashoka’s first wife Samragyi has overseen the entire construction work.

The Thracian Tomb of Kazanlak Bulgaria was built in 4th century BC; UNESCO has undertaken the preservation work since 1979, when the monument was declared as a world heritage site. It has a vaulted brickwork “beehive” near the tomb. The Thracian tomb is situated near the ancient Thracian capital of Seuthpolis, Thracian is a part of graveyard, which comprises with a narrow corridor and round burial chamber.

The Parthenon is a temple on Athenian Acropolis, Greece. The temple is dedicated to a maiden goddess Athena, the people of Athens consider her as their patron. Construction began in 447 BC and was completed by 438 BC. This was when the Athenian Empire was at the height of its power and construction, the building till date is one of the most important surviving structure of Classical Greece.

Knossos was undeniably the capital of Minoan civilization and culture. The palace was partially restored under the direction of Arthur Evans in the earliest years of 20th century. The palace was vacant at end of the late Bronze Age, 1380-1100 BC approximately. The population was probably supported by Mycenaean Greeks. The people who had occupied the city earlier were using Linear B which was an administrative script.

The Great Pyramid of Giza, Egypt is also known as Pyramid of Khufu or Pyramid of Cheops. It is an oldest and largest of three pyramids in Giza Necropolis. Giza Pyramid is the oldest of seven wonders of the Ancient World and the only one pyramid has remained unbroken. People of Egypt believe that pyramid was built as a tomb for the dynasty of Egyptian Pharaoh Khufu. The construction took about 10 to 20 year period to conclude, around 2560 BC. The Pyramid height is about 146.5 meters (481 feet) and was it remained the tallest man made structure in the world for over 3800 years.

The Pyramid of Djoser is located in Saqqara necropolis, Egypt; the pyramid was built in 27th century BC for the burial of Pharaoh Djoser by Imhotep, his vizier. The pyramid was the central characteristic of an enormous mortuary complex, a courtyard surrounded by traditional structures and decoration. The pyramid originally was about 62 meters tall with base of 109m x 125m and was clad with polished white limestone.

The Tarxien Temples are an archeological complex in Tarxien Malta. The temple was constructed approximately around 3150 BC. UNESCO acclaimed it as a World Heritage site in 1980. Tarxien Temple is known as one of the oldest and most elaborately decorated of temples of Malta. The main highlights of the temple are the rich and intricate stonework, which includes depictions of domestic animals carved in relief, altars, and screens decorated with spiral designs and other patterns.

La Hougue Bie is an historic museum; it is located in Parish of Grouville, Jersey. La Hougue Bie has about 18.6 meters long passage chamber covered with 12.2 meter high earth mound. For the first time the place was excavated by Societe Jersiaise in 1925, in Western Europe. The site features one of Europe's finest passage graves where you can learn about life in Jersey's Neolithic community 6,000 years ago. It is also one of the world’s largest and best preserved route graves. It is one of the most impressive and best preserved monument of Armorica Passage grave groups.

The Tumulus of Bougon or Necropolis of Bougon is a group of five Neolithic barrows. Tumulus is located in Bougon, France. They were discovered in 1840 and during its about 200 skeletons were discovered in three layers, separated by stone slabs. The place was acquired by the department of Deux-Server in 1873 to protect and maintain the great monument. Tumulus of Bougon is one of the oldest pre-historic structure estimated to be built around 4800 BC, the excavations resumed in late 1960s.