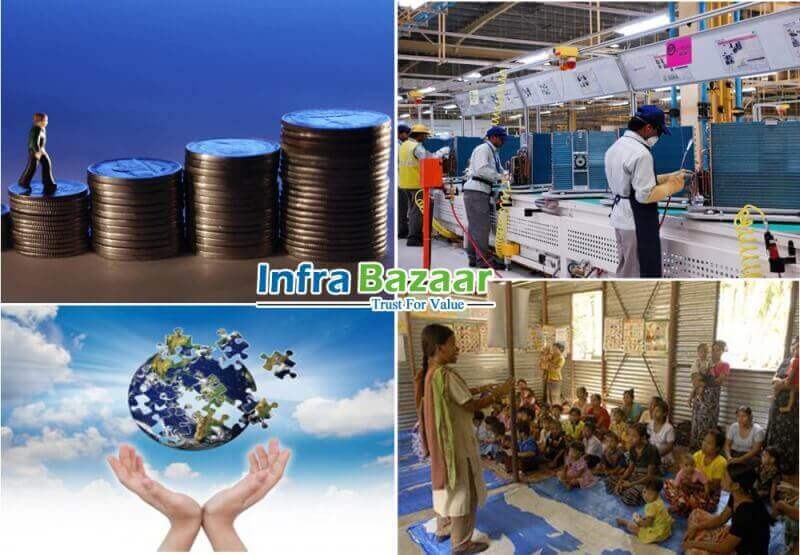 LSE’s Ruth Kattumuri highlights some economic challenges that are of priority for India’s development in the coming years. Here is the list of the Top 10 foreign policy challenges for India in coming years.

Sustainable growth: The United Nations describes sustainable growth as a process that “fulfils the needs of the present without compromising the ability of future generations to meet their own needs.” This year, academics working on India questioned whether Indian growth was truly sustainable, or whether the country had failed to utilize resources generated by recent economic growth by investing much more in education and healthcare and developing infrastructure in an environmentally responsible way. Heading forward, India must better assess how to enhance economic growth together with low-carbon development initiatives including ways to improve food and water security.

Inclusive growth: For Indian growth to be sustainable, it must be inclusive to cover issues related to inequalities between castes (including tribal children and elderly people living in remote areas), color (dark and fair), disability, gender, regions (rural-urban as well as differences between states), and more. While the gender gap in employment and political participation has been narrowing, there is much more to be done for the health and safety of girls and women. India needs to do more to ensure inclusive growth, particularly by improving social protection policies. Good examples such as ‘Amma’s unavagam/canteen’, which was recently introduced in Tamil Nadu and sells highly subsidized nutritious meals, are worth expanding to other states to help address problems related to high malnutrition levels.

Demographic dividend: Approximately 200 million Indians are between the ages of 15 and 24 and India is well positioned to make the most of a growing population of working age. However, to reap the demographic dividend, India will have to manage the demand and supply of skills and labor carefully. While the government has introduced policies to improve access to education, much more needs to be done to improve the quality of education, standards of teaching, methods of examination, development of skills, vocational programs, etc. In order to make Right to Education policy effective, the country should also address the challenges of bridging the gaps between children from disadvantaged and advantaged backgrounds being able to study together and better understand, respect and befriend each other. In the New Year, India should look to develop public-private partnerships and social entrepreneurship programs that can ensure livelihoods for its young population.

Inflation: The issue of high inflation is uppermost in the minds of politicians, policymakers and the people. Consumer prices in India have risen at an average annual pace of 10 per cent during the past five years, and Indian households are bracing for another 13 per cent increase next year. To check inflation, the Reserve Bank of India has raised interest rates and will review India’s monetary policy framework in line with recommendations by the Urjit Patel Committee, which is expected to submit its report at the end of the year. It is also essential to manage artificially induced national and international mechanisms. The central bank and Ministry of Finance are working together to analyze and understand the reasons and find ways to encourage investment and curb inflation.

Rapid urbanization: Indian cities are growing at an unprecedented rate—the country’s urban population is expected to grow to 590 million people by 2030. This rapid urbanization is also expected to drive economic growth: according to some estimates, cities could generate up to 70 per cent of new jobs created until 2030 and produce 70 per cent of Indian GDP. To reap the economic advantages of urbanization, the Indian government must develop better policies to meet urban infrastructure needs through sustainable means and address growing urban poverty and inequality.

Land reforms: The Land Acquisition Act passed this year received mixed reviews. There are concerns that the new law will drive up costs across the economy and make several industrial and real estate projects unviable, without necessarily delivering justice to farmers and landowners whose lands are acquired. These and other challenges related to land reform – particularly in the context of urbanization and the growing need for low-income urban housing – mean that India will have to continue drafting land-related legislation to ensure sustainable and equitable growth.

Centre-state dynamics: The evident role of states in influencing economic growth, governance and policies has increasing become more prominent. States are driving localized growth, enhancing their own investments, and developing models that are being replicated across the country. But the centre needs to do more to facilitate state-state interaction and the states should also be proactive in sharing of knowledge of best practices among themselves. The central government should also seek to do more to balance the uneven growth between states.

Older citizens: While India seeks to harness its young population to drive growth, it must also start planning for increased expenditure on health and welfare services for the elderly. Fertility rates in India are declining as life expectancy increases: there will be more than 300 million Indians over the age of 60 by 2050. ‘Indians never seem to retire’ has been said of people in various sectors, particularly in urban areas, as many continue to work for several years after retirement. Nevertheless, the shifting demographics will add to the burden of inadequate healthcare, welfare services, and families. Elderly women, who will outnumber men, are expected to be the most vulnerable. In addition, there are interesting opportunities and challenges of elderly parents remaining in India while their children have migrated. To tackle these challenges, India must develop policies to ensure that its older citizens too have healthy and happy lives.

India-China trade: Despite various diplomatic standoffs this year, the governments of both India and China remain eager to boost bilateral trade to US$100 billion in the next few years. No doubt, trade with China is a significant component of India’s economy. But trade relations remain one-way, with more Indian consumers buying Chinese goods than the other way around. India will have to address this trade deficit in the New Year by improving its export competitiveness and identifying more goods, services and policies to enhance balanced trade with to China.

India-Pakistan trade: In the past decade, India-Pakistan trade has increased from US$370 million per year to US$2.4 billion. But this is just a start: according to some estimates, the volume of a normalized bilateral trade regime could be as high as US$40 billion. The onus for progress on bilateral trade relations currently rests with Pakistan: despite repeated calls for improved India-Pakistan ties, Prime Minister Nawaz Sharif, who was elected to power in May, has yet to grant India Most Favored Nation status. While there is little India can do to boost trade until Pakistan takes this key step, New Delhi should continue its support for increased bilateral trade, as it would be for the benefit of the economies of both India and Pakistan while also helping to improve the political relations between the two countries.