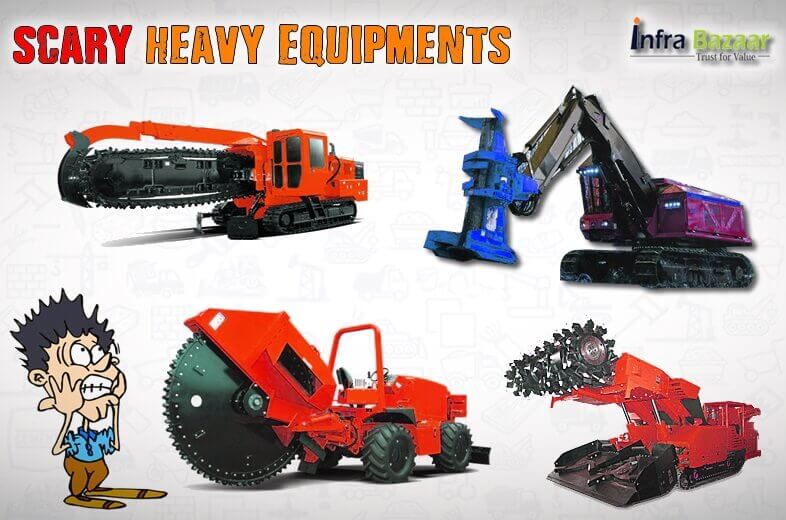 5. The Chain Trencher, aka Chainsaw Tank: The Chain Trencher, looks like a battle tank which is used to fight a Cyclops or giant chainsaw with tank treads. A company Vermeer manufactures “Chain Trencher”, this can dig trenches about 18 feet deep and four feet wide which is approximately size of fat giant. The Chain trencher as terrifying as it looks; it can only go through mud and dirt. The selection of chain trench method must include a range of rock cutting machine properties. However, it may not be useful in cutting Solid Rocks but might have cost benefits and fewer poor environmental effects compared to other alternative methods.

4. The Walking Harvester, aka the Tree-Eating Robo-Spider: The Harvester was originally developed to tackle the forests of Sweden and Finland in the year 1980’s. This machine was designed to work in difficult grounds cutting forests or forest reduction operations. At the end of the operation Harvester’s long bang felling head, which the operator uses is required to grab a tree while a large rotating blade slices from first to last.

2. The Rock Wheel, aka God's Circular Saw: The Rock Wheel looks like similarly as “The Shredder built”, it is a giant circular saw on treads and mainly it is used to cut the trenches through concrete, asphalt and solid rock. By using the Rock Wheel you can easily cut the rock, concrete and other tough surfaces. It’s mainly designed to take on challenging ground conditions. Rock wheel is one of the scariest and effective equipment in road, rock cutting.

1. The Continuous Miner, aka Satan's Rock Eating Battle Tank: Its primary purpose is mining and not to scare you. That spinning wheel makes the coal loose, the coal get scooped on the ramp below and being collected by those arms on the ramp. Then the coal is moved by conveyor to the back of the machine where it comes out onto a shuttle care waiting to collect and remove the payload from the mine.