Welcome to Hyperloop - A Subsonic Mode of Transport 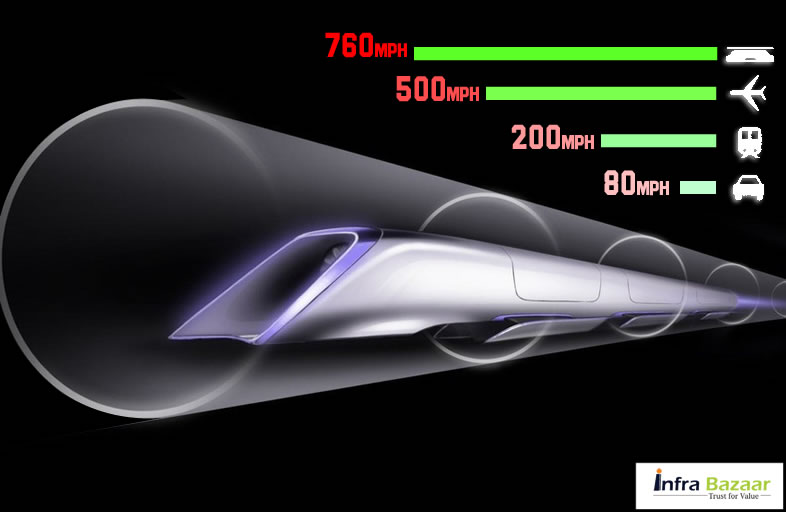 Ever thought of travelling at 700 MPH at the price of a bus ticket? Well this is the future, welcome to the world of Hyperloop. Two companies Tesla and SpaceX's Elon Musk have started working on this revolutionary mode of transport called Hyperloop. An extremely cost effective means of transport where one can experience travelling speed less than the speed of sound. It means travel time from Mumbai to Ahmadabad will be less than 30 minutes.

The Hyperloop is essentially a futuristic train that Elon Musk calls "a cross between a Concorde, a Rail gun and an Air Hockey Table". It is based on the very high speed transit (VHST) system. The idea initially was proposed in 1972, which combines a magnetic levitation train and a low pressure transit tube. It uses tunnels and pods or capsules to move from one place to another.

Though the concept was in existence since quite some time but there has been resurgence in interest in pneumatic tube transportation after being reintroduced with updated technologies by Elon Musk in 2013. Several companies have sprung up from the proposed idea and are now working to make Hyperloop a reality. A 5-mile test loop track will start this year in Quay Valley, California, on a site owned by Hyperloop Transportation Technologies.

The Hyperloop is a completely a self-sufficient system that relies on renewable energy, among others, to produce enough energy to power the system in its entirety. Protected from the elements, and utilizing state-of-the-art technology, the Hyperloop Transportation System is designed with safety as a primary goal.  It promises that construction and operation costs would be significantly lower than any other mass transport system. A tower-like structure used for carrying electricity cables high above the ground called pylons which are already in use for public transportation would be used in the construction of such Hyperloops. These reduced costs would directly translate into cheaper ticket prices, connecting people and communities, and providing new economic growth and opportunity.

At present the concept is being proposed for short distance travels, where the system will be much faster than existing rail networks and much cleaner that flight. Speeds of over 700mph are suggested for journeys, but on the hindsight there are practical implications that have to be considered on short stop-start journeys, such as the acceleration and deceleration sensation that passengers would go through.

The planning documents that have already been shown off on planned a route between LA and San Francisco, a 354-mile journey that would cost around $6 billion in construction. This is based on a passenger-only model whereas one that can also transport vehicles too would be $7.5 billion.

If researchers and companies working on it are to be believed Hyperloop could be a reality by 2018.