What Is Cofferdam and It’s Types 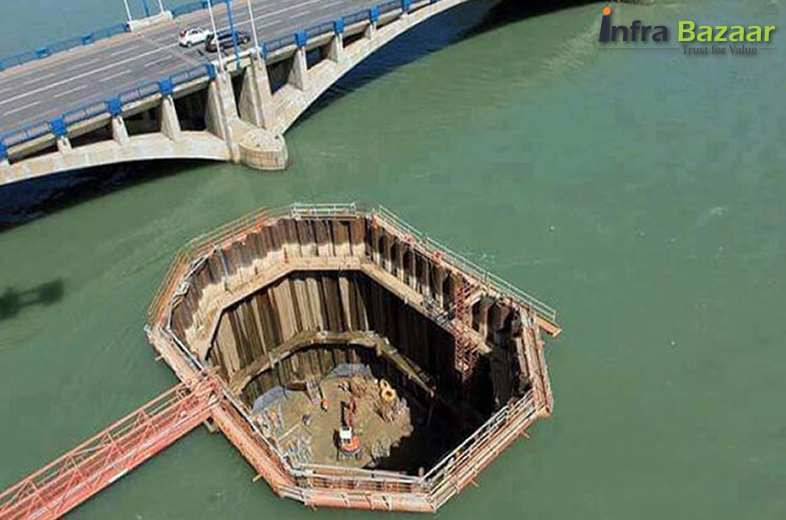 Yesterday I was watching a documentary on a Bridge having piers founded in the water and was wondering how engineers and constructors are able to lay pile foundation at such a high-speed flowing water of the river.

After research of few hours, I have got a handful of knowledge about the technique we would be dealing with in this article. The technique is called a Coffer Dam. After finding from the dictionary we understood the word Coffer means a casket, chest or trunk, which in other word means a safe place to work within. Thus the definition would be:- “A cofferdam is a temporary structure built to enclose and encase an area that is meant to be excavated for the construction of the foundation.

Cofferdams are used when the size of excavations is very large and sheeting and the bracing system becomes difficult, inconvenient or uneconomical. Cofferdams are generally required for foundations of structures, such as bridge piers, docks, locks, and dams, which are built in open water. These are also used for laying foundations on open land where there is a high groundwater table. A cofferdam generally consists of a relatively impervious wall built around the periphery of the proposed excavation to prevent the flow of water into the excavation so that the foundation may be laid in dry condition.

These are the simplest type of coffer dams well-adapted to depths of water up to 3 m. Earth embankments are constructed around the area to be dewatered. The earth cofferdams are built of local soils, preferably fine sand.

These usually have a clay core or a vertically driven sheet piling in the middle. The upstream slope of the bank is covered with a rip rap. A successful coffer dam need not be completely watertight. For reasons of economy it is not possible to make it watertight and hence some seepage of water into the excavation is usually tolerated. The water collected is pumped out of the excavation. The embankment should be provided with a minimum freeboard of 1 m to prevent overtopping by waves.

Sand-bag cofferdams are used in an emergency.

Rockfill coffer dams made up of rockfills that are sometimes used to enclose the site to be dewatered. These are permeable and are usually provided with an impervious membrane of soil to reduce seepage. The crest and the upper part of the impervious membrane are provided with rip rap to provide protection against wave action. Overtopping does not cause serious damage in case of rock fill cofferdams. The slopes of rock fill cofferdam can be made as steep as 1 horizontal to 1.5 vertical.

Single-sheet piling cofferdams are generally used to enclose small foundation sites in water for bridges at a relatively shallow depth. In this type of cofferdams, there is a single row of cantilever sheet piles. The piles are sometimes heavily braced. Joints in the sheet piles are properly sealed. This type of coffer dams is suitable for moderate-flow velocities of water and for depth up to 4 m. The depth of penetration below ground surface is about 0.25 h for coarse sand and gravels, 0.50 h for fine sand and 0.85 h for silts, where “h” is the depth of water. Sometimes, Single-sheet pile cofferdams are provided with earth fills on one or both sides to increase the internal stability.

A double wall sheet piling cofferdam consists of two straight, parallel vertical walls of sheet piling, tied to each other and the space between walls filled with soil. The width of the parallel piles is empirically set as (h/2 1.50 m), where is the height of water. Double-wall sheet piling coffer dams higher than 2.5 m should be strutted. Sometimes, an inside beam is provided to keep the phreatic line at the bottom. The filler material should have a high coefficient of friction and unit weight so that it performs as a massive body to give the cofferdam stability against sliding and overturning. Suitable measures should be adopted to reduce the uplift on the cofferdam. This is generally done by driving the sheet piling on the upstream as deep as possible. The double-wall sheet piling cofferdam has the advantage of having less leakage than that in a single-wall cofferdam. These cofferdams are suitable up to a height of 10 m.

A braced cofferdam is formed by driving two rows of vertical sheeting and bracing with wales and struts. The braced cofferdams are susceptible to flood damage. Land Coffer Dams. Braced Cofferdams are sometimes used as land cofferdams to prevent groundwater from entering the foundation pit on land and to support the soil so as to prevent it from caving in. After the pit is dewatered, the structure is concreted. When concreting has been completed above the water level, the cofferdam is removed.

This type of cellular cofferdam consists of circular arcs on the inner and outer sides which are connected by straight diaphragm walls. The connection between the curved parts and the diaphragms are made by means of specially fabricated Y-element. The coffer dam is thus made from inter-connected steel sheet piles the cells are filled with coarse-grained soils which increase the weight of the coffer dam and its stability. The leakage through the cofferdam is also reduced.

To avoid rupture of diaphragms due to the unequal pressure on the two sides, it is essential to fill all the cells at approximately the same rate. One advantage of the diaphragm type is that the effective length of the cofferdam may be increased easily by lengthening the diaphragm.

It consists of a set of large diameter main circular cells interconnected by arcs of smaller cells. The walls of the connecting cells are perpendicular to the walls of the main circular cells of large diameter. The segmental arcs are joined by special T-piles to the main cells. The circular-type cellular cofferdams are self-sustaining, and therefore independent of the adjacent circular cells. Each cell can be filled independently. The stability of such cells is much greater as compared with that of the diaphragm type. However, the circular cells are more expensive than the diaphragm type, as these require more sheet piles and greater skill in setting and driving the piles. Because the diameter of circular cells is limited by interlock tension, their ability to resist large lateral pressure due to high heads is limited.