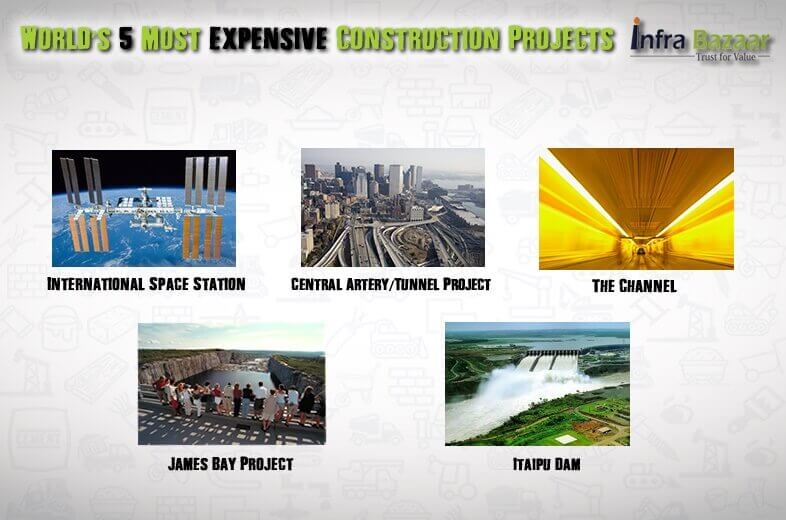 The International Space Station or ISS is a space station or habitable artificial state. It is one of the world’s most expensive construction projects. It is a joint project of five different space organizations, namely, The Federal Space Agency of Russia, NASA of the United States, JAXA of Japan, ESA of the European Union and CSA of Canada. Astronauts from 15 different countries have visited it. The project was so difficult and heavy that it was already four years behind schedule when it began in 1998, the project was originally estimated cost about $17.4 billion but it ultimately grew up to approximately $160 billion.

The Central Artery/Tunnel Project is also unofficially referred as “The Big Dig”. The Big Dig tunnel is about 5.6 kilometers long. In early 1990’s Boston had major traffic problem on the city’s Central Artery, it was a main highway through the city and backed up around 10 hours a day and it costed the local economy $500 million annually. In response the Central Artery/Tunnel Project or Big Dig was launched in 1991 to replace the six lane highway with the underground of eight to 10 lanes. The project was most expensive construction scheme in US history as it involved a creation of several major bridges, roads and tunnels.

The Channel Tunnel is also referred as “Chunnel” is about 50.5 kilometers (31.4 mi) rail tunnel linking Folkeston and Kent in the United Kingdom. In 1994 the Chunnel was opened and it costed about $21 billion (80% more than estimated project cost). The Chunnel was largely successful in moving people and freight between the United Kingdom and France in just 35 minutes. More than 325 billion people have used it since the channel was opened. At the Lowest point of the Channel 75m (250 ft) deep, the tunnel has longest undersea portion in the world.

The James Bay Project is a series of hydroelectric power stations on the La Grande River in the northwest part of Quebec and diversion link of rivers into the La Grande River in northwest part of Quebec. The James Bay project costed about US $20 billion to construct and it has installed energy generating capacity of 16,527 megawatts. In future it also has provisions of expansion that may increase up to around 27,000 megawatts. The complete eight power stations of the La Grande Complex generates on an average of 83 terawatt hours in a year. The first phase in the 1970’s to 80’s construction costed about $13.7 billion. It was enough to meet the meet the complete demand of small industrialized economy as Belgium. It was built by the Societe d’Energie de la Baie James for Hydro-Quebec.

The Itaipu Dam is a hydroelectric dam is located on border of Brazil and Paraguay. The dam supplies about 90% of electricity to Paraguay and 19% to Brazil requirements; dam capacity is about 14,000 megawatts. The energy it generates every year is largest in the world, running 94.7 TWh and 91.6 TWh in 2008 and 2009 respectively. Each year ITAPU generates 75 TWh of electricity and avoids 67.5 million tons of carbon dioxide emissions - compared to coal power plants. The dam construction costed about US$19.6 billion.