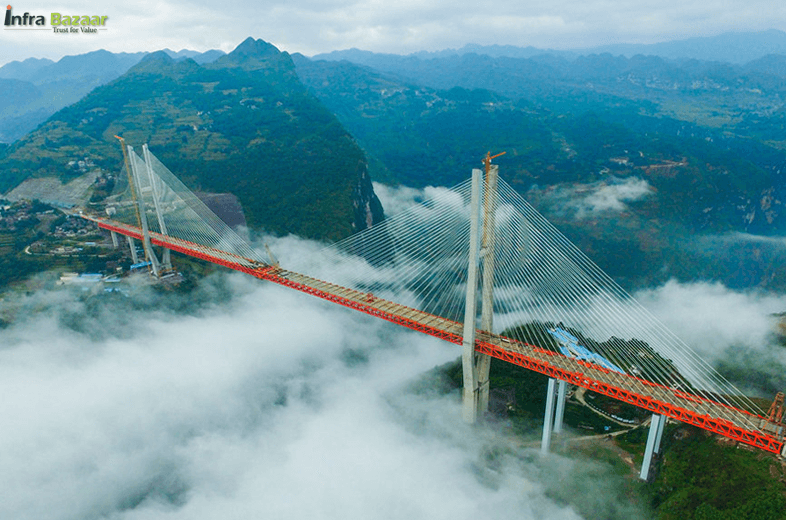 Features: The world's highest bridge, which rises 570 meters above a valley, opened in southwest China.  It has a height equivalent to a 200-storey building, and the Beipanjiang Bridge links southwest China’s Yunnan and Guizhou provinces. It has the rare honour to be the highest in the world, by the vertical distance from the bridge deck down, to the ground or water surface beneath the bridge span.

The structure overlooks the Beipanjiang Valley. The entire 4-lane divided highway stretches to an incredible marvel covering a distance of 3,405-kilometres on the national motorway linking Hangzhou city in southern China with Ruili city on the China-Myanmar border.

There was the use of concrete-filled steel troughs which were located within the back spans trusses, to keep the deck from getting pulled up, from the downward forces, of the central span truss. The tower tops are more than 735 meters above the Beipan River surface. The original paint scheme was blue for the truss deck sections but they decided to have orange later.

Guizhou is home to several high bridges in China and is situated in rolling mountains and gorges. This is a serious infrastructure and can be considered as a grand job where the quality has not been compromised. It is a Modern Marvel where the finest construction skills have been used in good measure. The construction of this path-breaking and record structure lasted for three years and had the finest contribution of the fittest and highly skilled Engineers and Technicians. They were close to 1,000. It spans a gorge that’s 2,000 feet deep. For comparison, the Golden Gate Bridge in San Francisco is 220 feet high, and One World Trade Center of New York is 1,776 feet high. It’s stunning and also looks like man's great accomplishment.

The Beipan Jiang flows on a North-South rift that divides the Western and Eastern halves of Guizhou. The vertical limestone cliffs drop deep and the river is in a shadow during the day. It has pushed the boundaries of China’s bridge engineering community. It will allow easy access into nearby Yunnan Province across terrain that was previously inaccessible to normal cars and trucks.

The construction of the 1,341-meter-long cable-stayed suspension bridge started in 2013. It has a cost of 1 billion Yuan equivalent to 150 million U.S. dollars. It is an amazing and rare work of purest imagination, Impressive engineering, hard work, good planning, solid investment and great implementation, anywhere in the world.

There is greenery on one side and on the other side, there are rocks. It was the result of the inspiring leadership of Chinese president MR XI JiN PING and the Engineers were thrilled to complete the outstanding work successfully. it was an extension and amalgamation of 5,000 years of Chinese civilization which is Simple but beautiful. There has been a will to make it last longer than anything built in the country. There was a great work ethic and consistent effort presented here.

One has all the admiration and appreciates the techniques used in the construction of this bridge. It is surely a work of unbelievable spirit and will definitely be unbeatable in future. It is beautifully engineered like a flawless musical instrument and presents the best of Chinese to the world.

It is expected to reduce road travel times from Liupanshui to Xuianwei from five hours to two and has four-lane road deck. The Beipan River, over which this is built, is part of the great Pearl River basin.  Owing to its geography, the bridges that cross it tend to be of great height.

The middlemost cable anchorage will be supported by the longest stay cable. The railings are particularly solid,

It topples all previous spans for height and is the first cable-stayed bridge to be The World’s Highest Bridge.

This will put an end to the use of outdated infrastructure which had limited the growth patterns in the remote areas as compared to the Eastern Provinces where accessibility had improved steadily and rapidly.

The connecting work is a top priority regardless of how difficult the mountain terrain may be. Today the Province of Guizhou is home to several high bridges than anywhere on earth. By 2020 Guizhou will have more of such bridges as this is a part of the great legacy of construction.