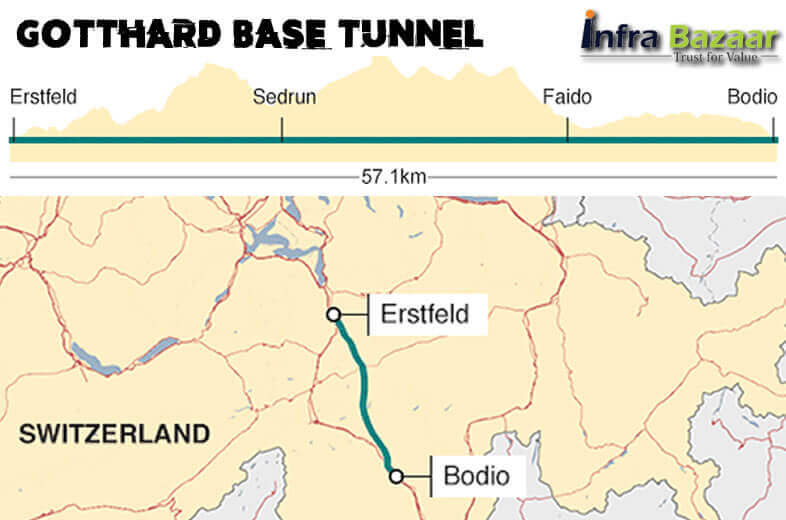 The world’s largest and the deepest rail tunnel is operational now after two decades of construction work undertaken in Switzerland. It has costed more than $12 million (£8.2mn). The foundation for the project was laid in the year 1999 at the Gotthard Base but the project was culminated in the year 2015 and was opened to public by 1st June 2016. The tunnel has a length of 57.5km (35-Miles).

The 57 km twin-bore Gotthard base tunnel will provide the maximum speed to the train link under the Swiss Alps between the Northern and the Southern Europe regions. Switzerland says it will revolutionize The European freight transport. Currently the goods are being carried on the route by millions of Lorries and which will now go by train instead.

The Gotthard base tunnel has surpassed the Japan's 53.9km Seikan rail tunnel which was the longest in the world and pushes the 50.5km Channel Tunnel between the UK and the France into 3rd place.

Here is the list of the world’s largest and deepest rail and road tunnels.

Two decades of waiting has finally come to an end and two trains were placed in opposite directions one from the Northern side and another form the Southern side of the Gotthard Base Tunnel. The two trains were carrying hundreds of guests who had won the Tickets in a Lucky Draw. When the two trains started to depart the route was officially declared open in Gotthard Base Tunnel. Not only Switzerland Officials were present but also it saw officials of other countries attending to the opening ceremony of the Gotthard Base Tunnel, and they had their own speeches. One official recalled the great Franco - British Project, which was completed in 1994 and said that: “Nobody could have imagined that one day you would be able to travel from England to France in that way”.

Stay Tuned for more updates on Construction of Gotthard Base Tunnel.