Your very own India excavator guide! 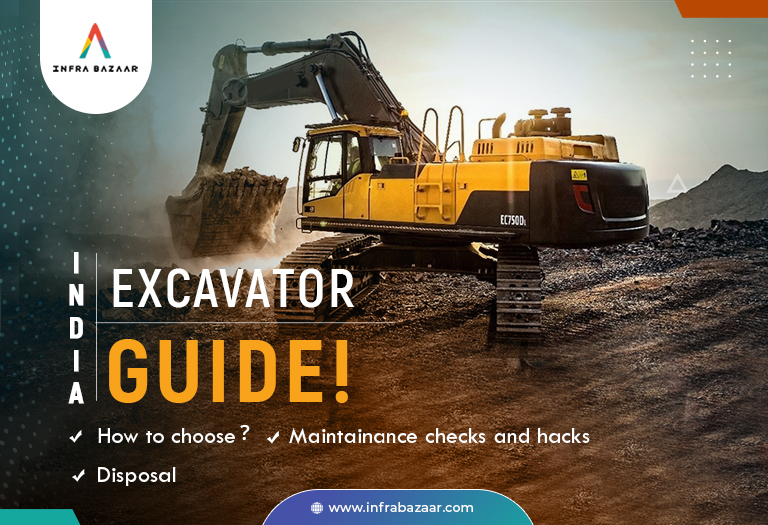 Excavators are heavy construction equipment consisting of a boom, dipper, bucket, and cab on a rotating platform known as “the house”. The house sits atop an undercarriage with tracks or wheels. They are a natural progression from the steam shovels and are often mistakenly called power shovels. While renting or buying your excavator, you will want to consider its size and speed as well as working conditions on the job site such as the amount of space and the soil types.

1. Crawler Excavators: Unlike other large excavators that run on wheels, crawlers run on two large endless tracks and are optimal for mining and heavy-duty construction jobs. Also known as compact excavators, these excavators use hydraulic power mechanisms used to lift heavy debris and soil.

2. Wheeled Excavators: Wheeled excavators are similar in size and appearance to crawlers but run on wheels instead of tracks. Replacing tracks with wheels makes them faster and easier to manoeuvre on concrete, asphalt and other flat surfaces while still offering the same power capabilities.

3. Dragline Excavators: The dragline excavator is a larger excavator that operates with a different process. The equipment utilizes a hoist rope system that attaches to a bucket via a hoist coupler. The other side of the bucket is affixed to a dragline that runs from the bucket to the cab. The hoist rope raises and lowers the bucket while the dragline pulls the bucket toward the driver.

4. Suction Excavators: Also known as vacuum excavators, suction excavators feature a suction pipe capable of providing up to 400 horsepower. The excavator first releases a water jet to loosen the ground. The pipe, which contains sharp teeth at the edge, creates a vacuum that carries away soil and debris up to 200 miles per hour.

5. Skid Steer Excavators: Unlike standard excavators, skid steers have booms and buckets that face away from the driver. This orientation allows the attachments to reach over the cab instead of around it, making these excavators useful in more narrow areas and manoeuvring tricky turns.

6. Long Reach Excavators: As its name suggests, a long-reach excavator features a lengthier arm and boom sections. The design allows for better operation in hard-to-reach locations. The excavator’s extendable arm can reach over 100 feet horizontally.

There are many excavator companies in the Indian market and among all of them, these are some brands known best for their performance.

1. BEML India: Incorporated in 1964, Bharat Earth Movers Limited is based in Bangalore. Its services are marketed and maintained over a nationwide marketing system and they are distributed to more than 68 countries.

2. JCB India Limited: It is a renowned earth-moving and construction equipment producer in India. Its excavator series is indeed the finest featuring heavily loaded excavators that offer excellent outputs, sturdiness, reliability, and profitability.

3. Tata Hitachi: Formerly known as Telco Construction Company, Tata Hitachi is a joint venture of Tata Motors Ltd and Japan-based Hitachi Construction Machinery of Japan. Based in India, the company has its headquarters in Bengaluru.

4. Hyundai: It is a diverse set of businesses in the automobile industry. In 2007, Hyundai Construction India was established. It caters to the construction equipment needs serving the myriad types of machinery required by the industry.

5. Komatsu India: Established in 2007, it has its headquarters in Chennai. By providing high-end technology, precision, and reliable machinery, it serves the primary competency of elevated commodities areas of industry.

6. Larsen and Toubro: It also has a wide range of mining and construction products and is one of the top leading companies in the construction market.

7. Volvo: Volvo is based in Gothenburg and its Indian office is in Bengaluru. It manufactures a wide range of products including excavators, wheel loaders, pavers, articulate haulers, etc.

The price of these excavators can range from ?10 lakhs to ?90-95 lakhs depending on the type of excavator, the brand, and the model of an excavator. Most of the excavators from the brands such as JCB, Hyundai, and caterpillar could be available around the ?30-60 lakh bracket. For example, A 320 D2 model of Caterpillar costs about ?60 lakhs, while the R140LC-9V construction excavator costs about ?49 lakhs. If one is looking to rent an excavator instead of buying it, it would cost them about ?1.5-2 Lakhs a month.

Note: The prices and specifications are as of September 2022